Nicholas Brock, 53, is covered in neo-Nazi tattoos while his bedroom is covered in SS memorabilia. He was convicted after police found he had manuals on how to kill people

A right wing extremist covered in neo-Nazi tattoos has been jailed after he was caught with manuals on how to kill people with knives and make homemade bombs.

Nicholas Brock, 53, decorated his bedroom with SS memorabilia and was convicted of three counts of possessing documents useful to a terrorist after a trial.

The specific documents the charges relate to were found organised into a folder labelled ‘army military manuals’ on an external hard drive seized by police in January 2018.

The documents were The Anarchists’ Cookbook version 2000, which contains bomb recipes, a document on knife-fighting techniques and a US military manual containing further instruction on fatal knife attacks.

But a treasure trove of far right material was found at the home Brock shared with his mother in Maidenhead, Berkshire, including literature, weapons, bomb recipes and violent videos.

Sentencing him today, Judge Peter Lodder QC said: “It is clear by the wide range of other material that you are a right wing extremist.

“Your enthusiasm for this repulsive and toxic ideology is demonstrated by the graphic, racist, Islamophobic and white supremacist iconography which you have stored and appear to share with others of similar views.

“Your bedroom was decorated with SS memorabilia and a framed KKK recognition certificate in your own name was hanging on your wall.

“Your degree of devotion is indicated by your decision to cover your upper body and arms with tattoos of symbols associated with neo-Nazis.

“I do not sentence you for your political views, but the extremity of those views informs me about your criminality and the assessment of dangerousness.” 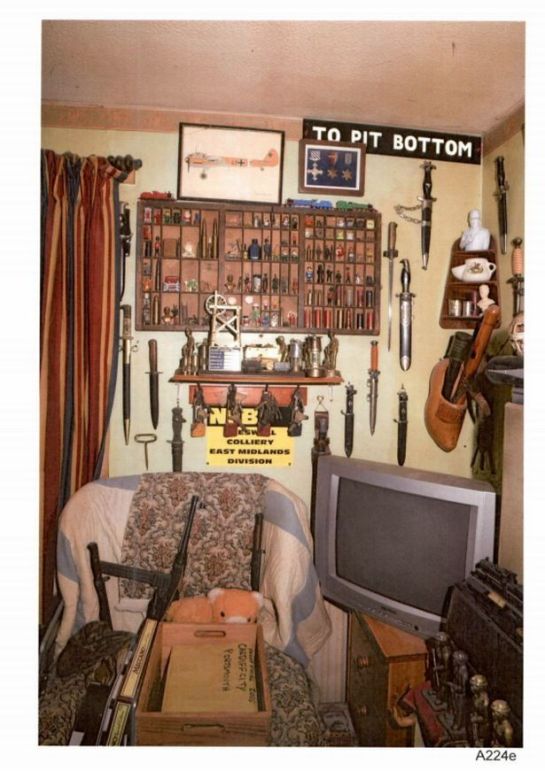 Jurors at Brock’s trial back in March heard police discovered Hitler’s Mein Kampf and books about owning a black slave and the neo-Nazi group Hail Combat 18 in Brock’s collection.

A variety of Second World War knives and daggers bearing Nazi and SS insignias and recipes for homemade bombs annotated with hand-drawn swastikas were found, the court heard.

Analysis of electronic devices found photos of a man “believed to be Brock wearing a balaclava, holding a large firearm and posing in front of a swastika flag in his bedroom”, prosecutors said.

There was also a snap of Brock wearing a ‘Make America Great Again’ cap, associated with Donald Trump ’s 2016 presidential campaign, and standing in front of the Confederate flag.

The Nazi flag, which bore an eagle and swastika, was found on Brock’s wall during the police search, as well as an SS wall plaque, Nazi propaganda poster and a framed Ku Klux Klan certificate of recognition with his name on it.

A Nazi badge was also found on his bedside table.

The jury heard Brock has tattoos of “Nazi figures from the 1930s and 40s”, an SS Totenkopf skull and swastikas on his upper body.

In a police interview, Brock claimed he was a military collector and denied downloading the documents.

He said his friends would sometimes come round to play Playstation games in his bedroom and he would often be out of the room “making a cup of tea or a sandwich”.

Ms Gargitter told the sentencing hearing Brock has a conviction for burglary and theft dating back to when he was 19, and more recently for two counts of racially aggravated harassment in 2017.

He was handed a community order at Berkshire Magistrates’ Court for the harassment after sending racist messages and memes to an ex-partner relating to her mixed-race children – one of whom was just eight-years-old.

In mitigation Edward Butler, defending, said the offences were “documentary”.

He said: “There are cases where those documents are possessed with a particular plan or purpose in mind.

“This is not such a case. These documents were three of a vast quantity of data, much of it macabre and concerning in nature, obviously, but plainly accumulated over many years.”

He said there was “no evidence or suggestion” Brock was a member of any terrorist organisation or “intended to participate in any form of terrorist act”.

Mr Butler said the material was “hoarded” and the idea his client would participate in a knife attack was “fanciful” as he did not have the “physical wherewithal or ability” due to health conditions.

He said Brock was a “vulnerable defendant” who will find prison life “very challenging”.

Judge Lodder said he did not find Brock met the ‘dangerousness’ provisions in the law – which would have meant he was eligible for a longer prison sentence.

He said: “It is argued that although the pre-sentence report finds there is a high risk of serious harm for you, there is a low likelihood of re-offending.

“I’m concerned about what the report correctly identifies as high levels of immersion in ideological extremism but I find your situation is borderline.”

Brock, of Lancaster Road, Maidenhead, was jailed for four years with a licence extension of one year.

He will not be released until he has served at least two thirds of the sentence.