Nimmo was a racist with an “Islamophobic mindset who was clearly dangerous”, the court heard

An internet troll who encouraged the murder of Muslims has been jailed for a string of terrorism offences.

John Nimmo also distributed the Anarchist Cookbook – a terrorist manual on how to make explosives.

At Newcastle Crown Court, he admitted seven offences including encouraging terrorism and distributing material likely to stir up religious hatred.

Nimmo, 32, of Osborne Avenue, South Shields, was jailed for 10 years and two months.

He also admitted possessing and disseminating terrorist material, possessing a prohibited firearm and breaching a Criminal Behaviour Order linked to a previous offence.

The court heard how he encouraged the murder of Muslims on his Gab social media account.

Prosecutor Matthew Brook told the court officers from Northumbria Police were tasked to regularly inspect Nimmo’s computer and devices as a result of the Criminal Behaviour Order.

He said Nimmo had posted illegal material in 2019 on social media, including calling Muslims “scum” and saying “a spring clean is in order”.

The hearing heard that another man Ciaran Anderson, 23, approached Dale Elliott, 29, and Nimmo in April 2020 asking whether they could make him a gun.

But after getting cold feet, Anderson rang police claiming to have heard a firearm discharged on Osborne Avenue in South Shields, where Elliott and Nimmo were neighbours. 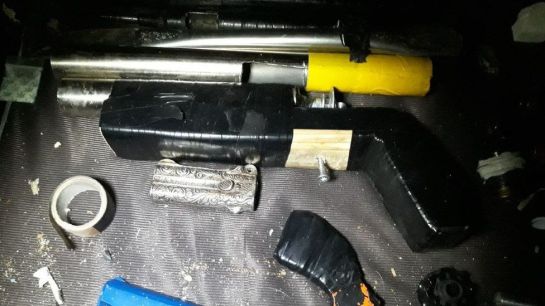 Weapons were found during searches of the men’s addresses

Anderson admitted conspiracy to transfer a prohibited firearm and was jailed for three years and four months.

Elliott pleaded guilty to possessing a firearm and ammunition without a firearms certificate and was jailed for five years and seven months.

He said: “The internet for him is almost like a drug that brings out the worst in him.

“There was no real chance anyone was going to act on his words.”