Mark White will spend more than two years behind bars after he called police officers racist names, spat on them while claiming to have Covid 19 and threatened nurses

A vile thug has been jailed after racially abusing and spitting at police officers while claiming to have coronavirus and tried to bite nurses trying to treat him in hospital.

Mark White subjected emergency workers to a tirade of physical and verbal abuse after being arrested in Northumberland.

The 36-year-old called officers horrific racist names, headbutted one of them and spat at two insisting he had Covid-19.

He was also disgusting with nurses who were attempting to treat him after he sustained an injury while being restrained by officers.

White, of Briarwood Cottages, Annitsford, North Tyneside, called one at the police station a “fat s**g” then when taken to hospital he tried to bite nurses’ hands and threatened to headbutt one if they tried to help him.

Newcastle Crown Court heard how White, who has 106 previous convictions, has an “appalling” record for attacking police officers.

He has now been sentenced to more than two years behind bars for his abhorrent actions, with his victims describing him as “vile” and “pathetic”.

Police were called to Seghill, Northumberland, on July 12 to to reports of a fight and White was arrested following a struggle.

He was abusive and threatening to officers throughout the journey to Bedlington police station.

On arrival, he kicked the rear door of the police van in an attempt to hit an officer. While being escorted into the station, he headbutted a PC, causing swelling above the right eye.

White continued to resist officers and due to his aggressive behaviour he was taken to the ground and put in leg restraints.

But he became injured during the ordeal and a custody nurse was called to provide treatment who he called a “fat s**g”. 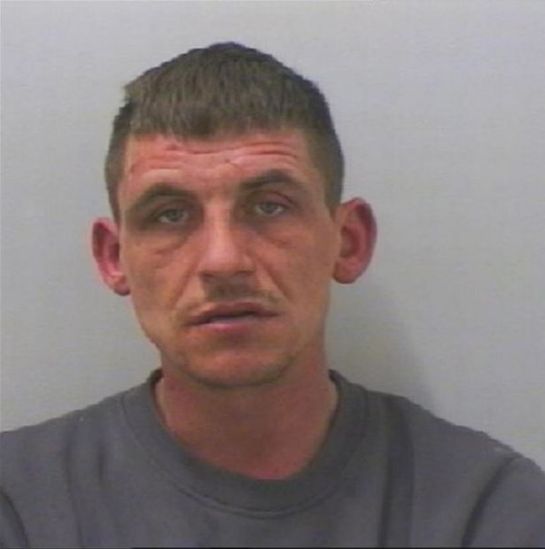 An ambulance was called to take him to hospital and he was put on a stretcher.

“The officer was upset, he is a person of mixed race.”

Two officers accompanied White in the ambulance and on the way to hospital he continued with his appalling abuse of emergency workers.

Miss Levitt said: “At hospital he tried to bite the hands of the nurses. He also threatened to headbutt one in the face if they treated him.”

White was taken into a room where he was restrained to enable medical support to be provided.

“He then said he had coronavirus and spat at both officers,” Miss Levitt added.

“Spittle landed on the left arm of one PC and on the other officer’s vest.”

A series of victim impact statements were read in court from those emergency workers White attacked and abused.

One PC said: “The assault made me feel so angry. White acted disgustingly and it makes me feel sick.

“While I understand I put myself in harm’s way as a key worker, I should not be deliberately spat at or coughed at. I have family members at home who are vulnerable who could be susceptible.

“I’m enraged he thinks he can treat any human being like this. It goes to show what a pathetic person he is.”

His colleague added: “I’m appalled by the behaviour shown by White towards myself, I was repeatedly coughed at and was hit with a mixture of saliva and blood.

“No one should have to be treated this way. I was helping him receive medical treatment.

“He was shouting he had Covid. Covid is killing people of any age.”

Defending Matthew Purves said White accepts his behaviour on the night in question was “appalling” and that when he drinks he turns into a bit of a “violent man”.

ChronicleLive is campaigning for a Government review over the lack of prison sentences handed out to thugs who attack our 999 heroes.

Just one in six assaults on emergency staff have resulted in their attacker being put behind bars in the last 12 months since new tougher sentencing powers came into force.

The court heard he has assaulted police officers several times previously and was on a suspended sentence for headbutting one PC and kicking two others at the time of the latest offences.

Jailing White, Judge Christopher Prince told him: “The public owe the police and other emergency services respect and gratitude, now perhaps more than ever before.

“In court we can put out a clear message to those who do not respect public services. Your conduct must not be tolerated for one moment.

“You have got an appalling record of violence and disorder, especially against police officers.

“These were all people who are trying to help you.”