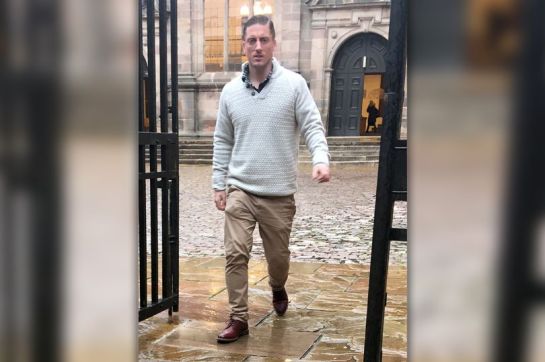 A drunk man racially-abused a police officer who had been called to a bonfire party at the defendant’s own mother’s Derbyshire pub.

A court heard how Matthew Pond asked the Asian officer “Have you been to prayers, today?” before repeatedly chanting “EDL, EDL” at him in reference to the far-right political group the English Defence League.

She said officers were asked to attend to Pond who was “being held down on the floor” by other pub goers due to his “aggressive behaviour”.

Miss Heath-Tilford said: “He was outside by the bonfire, clearly intoxicated, shouting and swearing.

“Officers tried to talk to him to find out what was happening and he continued to shout and swear so they tried to put handcuffs on him.

“He was resisting them as they arrested him for being drunk and disorderly he turned to PC Atwal and asked him ‘What time did you go to prayers today?’

“Then, while they were waiting for transportation (to take the defendant into custody) he was repeatedly shouting ‘EDL, EDL’ which the officer took as a reference to the English Defence League.”

Miss Heath-Tilford told Southern Derbyshire Magistrates’ Court that PC Atwal is of Indian ethnicity and took what Pond was saying to him as “racial abuse”.

In a victim impact statement, which was read to the court, the officer said: “The language that was used towards me was horrific.

“I should not have to deal with this kind of abuse while on duty as a police officer when all I am trying to do is my job,”

Pond, 32, of Cotmanhay Road, Ilkeston, was arrested, taken into custody and the following day, when he was shown the police’s body camera footage of the incident, said he felt “embarrassed” about his behaviour outside the pub.

He pleaded guilty to being drunk and disorderly and to using racially-aggravated abusive, insulting or threatening words or behaviour.

Colleen Webb, for Pond, said her client had written a letter to the court expressing his apologies to PC Atwal about what he said to him.

She said: “He is extremely remorseful and embarrassed.

“That evening he had been at a bonfire event at his mum’s pub and had too much to drink.

“Clearly something triggered his behaviour but he has little recollection of the rest of the evening.

“Since the incident he has had to build bridges with his mother because she owns the Bridge Inn and he has also received some unfortunate remarks (about the incident) on Facebook.”

They also ordered him to pay £100 compensation to PC Atwal, £85 prosecution costs and an £85 victim surcharge.
Derby Telegraph