He claimed to be a peaceful right wing activist in Grimsby who wanted to stand up for Britain’s “indigenous” people.

But loner Nathan Worrell was the secret neo-Nazi in Cromwell Street, a twisted racist who was trying to build bombs in his kitchen, inspired by a notorious nail bombing killer.

Even 10-years later, the trial of Worrell remains one of the most dramatic and truly horrifying cases that has been heard at Grimsby Crown Court.

And following the jailing of a cell of neo-Nazis and white supremacists last week for terrorism offences – including a couple who named their son Adolf – the similarities to the Worrell case are stark.

Both cases shone a light into the lives of right wing extremists and why anti-terrorism investigators now believe they hold as much of a threat as Islamist terrorist groups like ISIS.

At first, Worrell’s activities appeared to be limited to a vile campaign targeting a mixed race couple in the Willows Estate.

Officers were alerted after Worrell plastered stickers outside the home of a mother-of-one – branding her a “race-mixing slut”.

He focused his hate campaign on her and her husband, who was Bangladeshi born, and put stickers on the couple’s rear gate and on a lamp post near their home, reading: “Only inferior white women date outside their race. Be proud of your heritage. Don’t be a race-mixing slut.”

But, when police visited his flat in Cromwell Street, a much more worrying picture emerged that was to lead to a full blown terrorism investigation.

At first Worrell refused to let officers into his home but they forced their way in.

Inside, they discovered stacks of racist and neo-Nazi material, including five different types of sticker which had appeared outside the couple’s home in the Willows Estate. 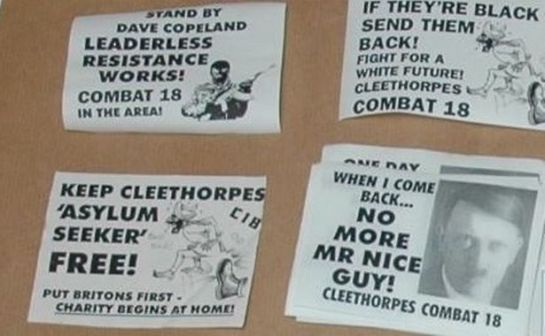 But it was only then that the true horrific nature of what Worrell was doing became apparent.

There were numerous bomb-making manuals and the raw ingredients to make explosive devices. These included instructions on how to make detonators and what ingredients were needed for bombs.

He had bought fireworks and dozens of boxes of matches. What appeared to be an amateur attempt to make explosives actually used similar methods as neo-Nazi David Copeland, a right wing extremist who killed three people, including a pregnant woman, in a series of nail bomb attacks in London in 1999.

In fact among hundreds of Nazi pamphlets, leaflets, stickers and books was one with a chilling reference to the Soho killer. ‘Stand by Dave Copeland’, it said. ‘Leaderless resistance works. Combat 18 in the area!’

Shortly before Worrell’s arrest, the High Court in London ruled that Copeland should remain in prison for at least 50 years, ruling out his release until 2049 at the earliest, when he would be 73.

It was later discovered Worrell had also been a member of right-wing groups, the White Nationalist Party, the British People’s Party, the National Front, the Ku Klux Klan and the British National Party. Like Copeland, a fascination with Nazi and right wing ideology had progressed to actively becoming involved with the groups and then researching home made explosive devices and detonators.

Experts told the trial Worrell’s experiments included dismantling the fireworks in a way which could be used to build explosive devices and police suspected he had been starting to assemble a crude pipe bomb in a coffee jar when he was caught.

He also denied a racially aggravated public order offence by displaying racist stickers with intent to cause the mixed-race couple harassment, alarm or distress.

The court heard that he held “far-right political views”. When interviewed by police, he described himself as a white nationalist. He said he believed that this country belonged exclusively to white people – and that he was fighting for this country in a peaceful manner.

But the prosecution claimed: “He was not merely a peaceful right-wing activist. He had more sinister, violent intentions.

“The very nature of the sticker campaign shows this defendant was not merely a collector of extreme right-wing items, but was active in taking steps to promote his ideology.

“He was plainly targeting ethnic minorities as part of his extreme right-wing views,” the prosecution claimed.

He had far-right political pamphlets and books – much of it Nazi – in his flat and he signed off text messages with “88”, a code for Heil Hitler. “He is undoubtedly a racist who follows the political views of the National Socialist or Nazi Party,” said the prosecution.

There were books giving two recipes for ‘how to make explosives’ and information on how to buy ordinary products which could be used. He had a large number of fireworks, some of which had been tampered with in order to remove the gun powder.

He also had a Death’s Head as the wallpaper on one of his three mobile phones. He told police he supported Combat 18 “in terms of some of their policies”, but did not believe in taking violent action. He denied ever specifically ordering material from Combat 18. Some stickers he had, but claimed not to have ordered, referred to a “Cleethorpes Combat 18”.

He admitted distributing stickers for far-right political groups, sticking them on lamp posts and junction boxes around Grimsby. When asked what he thought the effect of such stickers would be on any minority groups living in the area, he said: “I don’t know. I don’t associate with them.”

One text included an image of Adolf Hitler with a halo round him and another attacked the country’s immigration policies and called Britain a “cesspit for scum”.

The defence portrayed Worrell as a “slightly sad loner” who had long standing far-right wing beliefs but could not even drive or afford to go to rallies and meetings.

They claimed his activism was limited to “leafleting” and denied there was any bomb plot.

“He is not a terrorist,” claimed the defence, which branded the prosecution case “completely over the top” and accused it of throwing“ everything, including the kitchen sink” at the case.

Worrell did not give evidence at his trial and in January 2008 he was convicted by the jury in less than four hours.

He was jailed for seven years and three months. It included six years for the terrorist offence, with a consecutive 15 months for the racist public order offence.

Judge John Reddihough told Worrell: “Perhaps the least I say about the extreme views you hold and the way we saw you express them in the documents and other items before the court, the better.

“Maybe the citizens of this country are entitled to hold such views but what they are not entitled to do is embark on criminal offences in furtherance of those extreme views.”

He told Worrell: “You were in possession of a large number of instruction manuals for making explosive and other devices that could be used to harm innocent people.

“You were in possession of other items which appeared to advocate the use of violence to promote the extreme right-wing views you held.

“Courts in this country must make it clear that terrorism, in any form, will not be tolerated.

“Any offence which involves any step towards terrorist acts must be firmly punished.”

After the case, it emerged that Worrell was born in Cleethorpes and grew up in Grimsby with his mother and sister. The last school he attended was Havelock School, Grimsby, and he was believed to have worked for a warehouse in the town as a packer. He also had a job picking cabbages.

At the time of his arrest, he was unemployed and was not believed to have held any long-term employment since leaving school.

After the sentencing, the husband targeted by Worrell’s racist leaflets said: “It is not long enough. He will be out in three or four years. He will probably come out and still hold the same racist beliefs.”

Worrell appealed against his sentence which was rejected.

It is thought Worrell was released in 2011 and his whereabouts are currently unknown.