A man who smashed his former partner’s head against a coffee table and punched her more than 20 times has been locked up for ten years.

Jonathan Youthed, 31 of Hungarton Court, Peterborough, turned up at the woman’s house covered in blood and bragging about having assaulted another man on 25 March this year. 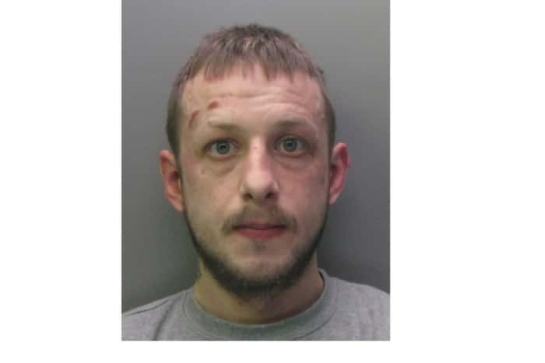 Earlier that day, Youthed had texted his ex-partner asking what she was doing later but it was obvious from his messages that he was drunk, Peterborough Crown Court heard.

Youthed then turned up at her house at about 10pm, but an argument began after he told her he had attacked another man.

The woman asked him to leave – but he refused, sitting on the sofa.

His victim tried to make him move – which is when he then launched the brutal attack, smashing her head against the table, an aquarium and other furniture.

The assault left the woman thinking she was going to be killed – and was only stopped when her teenage son kicked Youthed in the head.

Neighbours called 999 after hearing the victim screaming during the attack – and she was described as looking like something out of a horror film by neighbours when she left the house, because of the bruising she had suffered.

When he was arrested, Youthed made racially offensive comments to a police officer.

Today (Friday) he sat head bowed in the dock has he was jailed for ten years by Judge Sean Enright.

Judge Enright said it was a ‘sustained assault’ lasting several minutes, and said: “Her breath was being squeezed out of chest and she thought she was going to die.

“There was sustained bruising and some bleeding. Part of her hair had been torn out.”

The court also heard how he had also attacked a previous partner a number of years ago.

He was also convicted of making threats to kill, and causing racially aggravated alarm or distress.

In a statement read to the court, the victim said three months after the attack she had only left the house twice, and described herself as a ‘recluse’ because she felt she could not trust anyone anymore.

She said: “I truly felt he was going to kill me that night. I want him to be punished.”

Emma Rance, defending, said Youthed had shown remorse. She said: “He says if there was any way he could make amends, he would.

“He clearly needs some help, and hopes to get that in custody.”

DC Tania Weston said: “This was an horrific attack, which was only stopped because the victim’s son showed incredible bravery.

“I hope this prison sentence brings the victim some closure and helps her to move on with her life as best she can.

“I also want to thank her and all the other witnesses for having the strength to give evidence during the course of the trial.”

Youthed was given an eight year sentence for wounding with intent, two years for making threats to kill, to be served consecutively, and four months for causing racially aggravated alarm or distress, to be served concurrently.