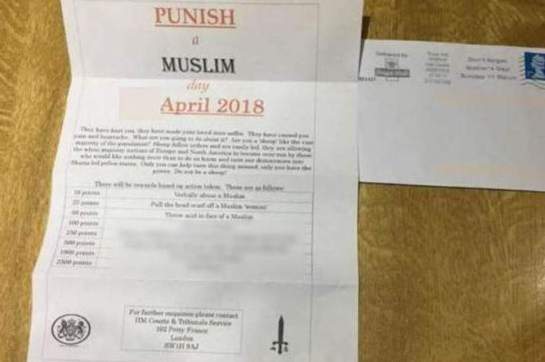 A white supremacist behind the Punish a Muslim Day letters who encouraged murder and sent hoax letters to The Queen, Theresa May, and David Cameron is facing years behind bars today.

Also among the victims was Tory peer and former security minister Lord Ahmad of Wimbledon.

Parnham sent dozens of envelopes of white powder to his intended targets from his home in Lincoln.

He sparked full scale alerts over fears that it was anthrax or other poisons. However, the substances eventually turned out to be harmless.

He signed off letters to Asian MPs and Mosques as “Muslim Slayer” and included the phrase “P*ki filth”, according to prosecutors.

In a message to then-Prime Minister Mr Cameron, Parnham wrote the phrase “Allah is great”.

Mrs May, then Home Secretary, and The Queen were among the targets of a series of letters containing white powder which included the sinister phrase: “The clowns R coming 4 you”.

At the Old Bailey today, Parnham pleaded guilty to a series of charges including soliciting murder, making hoaxes, and sending letters with intent to cause distress.

He admitted being the source of the Punish a Muslim Day series of letters, which caused widespread alarm and panic when they spread on social media in March and May this year.

He had also sent out hate letters under different titles, including “The Great Cleanse” which was aimed at Mosques around London in August last year. In those notes, he suggested that Muslims should be “exterminated”.

In Parnham’s so called “Jigsaw” letters from February 2017, he included a picture of a person being decapitated with a sword with a Swastika insignia, including the phrase “blood will be spilled”.

In March last year, Parnham sent letters to homes around the University of Sheffield campus, urging people to “commit exterminations of minority racial and religious groups” and offering £100 for each murder.

A letter to a mosque in Sheffield in August last year read: “To filthy sub-human c********ers I have left a little present for you.it will go off in a short period of time.

“The results will be explosive! Muslim blood will make the floors sticky. Your brains will be splattered all over the walls. A good Muslim is a dead Muslim. Killin Muslims is awesome”.

Parnham’s letter writing campaign was eventually linked to the Punish a Muslim Day threats, which were circulated on social media and urged people to attack Muslims on April 3 this year

Police later discovered that Parnham was an avowed fan of white supremacist Dylann Roof, who shot dead nine black parishioners at a church in Charleston, South Carolina, and the Punish a Muslim Day initiative was timed to happened on Roof’s birthday.

Parnham even wrote a fan letter to the convicted mass murderer in an American prison in December 2016, saying: “I just wanted to thank you for opening my eyes. Ever since you carried out what I’d call the ‘cleansing’ I’ve felt differently about what you’d call ‘racial awareness’.”

He added: “ My main reason for disgust is Muslims. I hate these animals with a passion. I sent letters with white powder to some mosques in London they had to close down parliament because of it.”

In one of his last series of letters, under the menacing title “Bang! You’re dead”, Parnham targeted mosques and Asian families living nearby and included a picture of a man holding a gun.

He used the words: “I have acquired a weapon and I am more than prepared to use it on you and members of your Masjid”.

Parnham, from Lincoln, today pleaded guilty to soliciting to murder, five charges of hoaxes involving sending noxious substances, seven charges of sending letters with intent to cause distress or anxiety, one count of making a bomb hoax, and one count of encouraging offences believing one of more would be committed.

He was remanded in custody until a hearing on November 23 to decide when he will be sentenced.