Fuelled by grief, Mamba and extremism, how dad’s obsession with social workers turned to terrifying campaign to kill 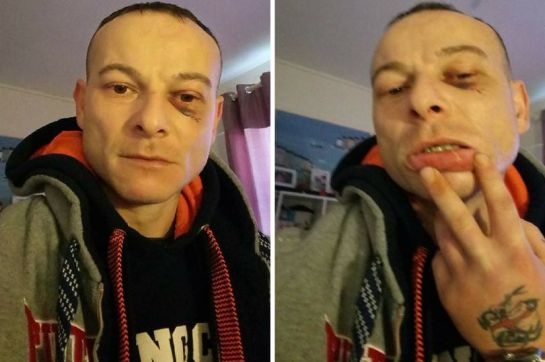 Dean Killen, who said he would kill social workers in Grimsby, after the tragic death of his son

A man who terrorised social workers had links to right wing extremists and convictions for stalking and carrying a concealed knife.

Dean Killen’s campaign of hate against Grimsby social workers was driven by the loss of his son who had died tragically while in foster care.

But his grief also masked a history of menacing behaviour, links to the far right and sinister social media posts in which he calmed he would “be killed” in a plot to overthrow the government.

Killen is now regarded as one of the most serious threats to the safety of social workers in Grimsby and North east Lincolnshire, despite starting a three year jail sentence for threatening to kill them.

Killen sent messages and left voicemails with individual social workers threatening to kill them. He also claimed they would be tracked down by a vigilante group named in court.

But Grimsby Live can also reveal that during his hate campaign he also contacted the far right group Britain First and its leader Paul Golding. Golding, a former British National Party member, is currently serving a jail sentence for race hate crimes.

After contacting Golding, Killen, who also followed a series of far right and extremist groups on social media, claimed in one social media post “U watch what happens if they team up with me”.

In another more disturbing post with echoes of violent extremists, Killen claimed he would “be killed” in an attempt to “replace the government” following his son’s death.

He wrote: “I hope you understand dum Britain. I will be killed but this country has destroyed me so I give your country back to you.”

One of Killen’s social media posts

Killen’s hate was fuelled by the tragic death of his nine-year-old son Leon who passed away after suffering an epileptic seizure. All four of Killen’s children, aged nine to 17, had been in foster care and he had been banned from attending Leon’s funeral.

Social workers later sent a letter to Killen telling him where his son had been buried in Grimsby.

The tragic death and repercussions triggered a surge in Killen’s hate of social workers in Grimsby and also brought him into confrontations with police.

Killen was known to police in Lincolnshire where he had lived and worked around Horncastle, Boston and Lincoln.

In 2007 he had been found with a 3-inch lock-knife concealed in his jacket when police were called to a domestic incident and found him acting suspiciously in a van.

Weeks later he was banned from approaching a couple who had been his neighbours and anyone in his former estate in Horncastle.

But Killen paid no attention to the courts. A few months later, he was jailed for continuing his campaign of intimidation against the couple after it was revealed he had sent the woman a barrage of aggressive texts and confronted her in the street and outside a school.

He was arrested and jailed but later appealed against the nine month prison term. Throwing out his appeal in 2008, a judge said Killen had been guilty of “repeated, thoroughly unpleasant and intimidating behaviour” and his “flagrant disobedience” to court orders was “deliberate and repeated”.

Killen moved to Lincoln where he had worked as a handyman and skirmished with police as he increasingly turned to the so-called “zombie drug” Black Mamba.

When his son died in August last year, Killen again embarked on a targeted campaign against police and social workers, holding the authorities and individual social workers responsible for the death.

In November Killen received a 16 week suspended prison sentence after a violent confrontation with police.

In January he confronted police after they broke up a chaotic protest in which he had laid out a banner on the cenotaph in central Lincoln saying: “Jail for corrupt social workers, police and judges”.

A few days later he boasted of fighting in the street, posing for selfies on Facebook showing injuries to his eye and mouth, saying: “Two fights in two days. The old me is back. Av been on a lot of scuffs this past year n plenty ov em coppers. I’m not ashamed. They took my kids so I fight. I will not stop. This system has done it with me.”

A complaint about his treatment by Lincolnshire police was thrown out after he claimed they had used too much force when arresting him.

The findings reveal that one officer had to use “distracting punches” to subdue Killen and “prevent further injury to any person”.

Now obsessed with the thought of revenge against social workers or police, on January 19 he called 999 claiming his son had been murdered and that he wanted to kill someone.

He then spoke to a senior police officer on the phone telling her he was going to kill the social workers and branding one of them a “child killer”.

Convinced Killen was now so unstable, he posed a real threat to the safety of social workers and police, officers moved to arrest him. Under questioning, he told police that after the death of his son he “did not care about the lives of others”.

Killen was sentenced at Grimsby Crown Court but in the dock remained defiant. Handcuffed in the dock, Recorder Gurdial Singh commented on Killen: “It’s me he wants to thump”.

And as he was led to the cells, he looked across the court, saying: “When I get out, you’ll know. I shall show you what has happened when I get out.”

A spokesman for the council said: “As the evidence of this case has shown, there is and was no excuse whatsoever for the threats made to social workers, who carry out very important and sensitive work in protecting children and families in such situations.

“The actions of the defendant were deeply frightening for staff concerned and there is really no justification for him behaving like who did towards people who were carrying out their jobs in very difficult family circumstances.”
Grimsby Telegraph