A gang of white supremacists convicted of inciting racial hatred for plastering racist stickers around a university campus have been jailed.

Chad Williams-Allen and Garry Jack were both convicted, along with two other men, of inciting racial hatred after plastering offensive stickers across Aston University campus signs in Birmingham in 2016.

Stickers put up at Aston University in Birmingham read “White Zone” and “Britain is ours – the rest must go” on the day of a Black Lives Matter march.

A judge said they had “potential to cause social unrest and racial tension in the city”.

Chad Williams-Allen, 27, from Bird End, West Bromwich, was sentenced to 21 months in prison during a hearing at Birmingham Crown Court.

Two other men, aged 23 and 27, who cannot be named for legal reasons, were handed 12-month and 16-month sentences respectively.

Garry Jack, 21, formerly of Heathland Road, Shard End, was given a 12-month sentence, suspended for two-years.

The men posed for a photo at Birmingham City University

The men, who were caught on the university’s CCTV, accepted posting the 11 stickers, but denied they incited racial hatred.

They insisted they were exercising their right to freedom of speech during the incident on 9 July, 2016.

Judge Paul Farrer QC told them: “The stickers could encourage people to believe that, as you would refer to them, ‘non-whites’ represent a danger to society, and society should be divided along lines of race.”

He also told Williams-Allen, an unemployed welder: “You identified with Adolf Hitler and Nazi Germany. You are anti-Semitic and a profound racist

Stickers were also recruitment tools for National Action, which the men were then members of, the judge said.

Images of the men’s handiwork was posted to the extreme far right group’s regional Twitter account soon afterwards, the hearing was told.

Judge Farrer added: “In this way you each intended to stir up racial hatred.

“Your behaviour was calculated to not only undermine these values, but also to foment hatred and unrest in society.” 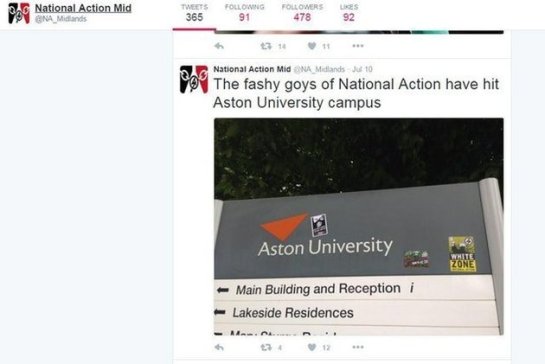