A neo-Nazi who acquired components for potential bombs and kept a list of Scottish mosque addresses is behind bars after being convicted of planning terror attacks.

The High Court in Edinburgh heard how the fascist acquired an arms cache which included a stun gun, hundreds of knuckle dusters, knives and metal bars.

Ward, who was previously jailed for three years in 2012 for possessing an explosive substance, also acquired a number of deactivated bullets.

The court heard the ammo could have been reactivated for use in a firearm.

Horrified police discovered the lethal horde after receiving a tip off that Ward had broke strict firearms legislation by buying a stun gun from abroad.

Detectives who searched Ward’s home in Banff, Aberdeenshire, also found he had acquired a mobile phone signal jamming device and a machine for picking up hidden bugs.

And they also discovered that Ward had downloaded tens of thousands of documents from the internet on firearms and survival techniques.

They also found that Ward, who told jurors he thought Hitler had made mistakes, had started to compose a book called “Combat 18 British Mosque Address Book.”

The court heard how in the title page of the book, the accused had written a dedication which read: “This book is dedicated to all that follow Mohammed and the Islamic faith.”

“You will all soon suffer your demise.”

This prompted the police to fear that Ward was set to launch terrorism attacks.

Ward, a former psychiatric patient, claimed he was suffering from mental illness at the time he downloaded the documents.

He said that he acquired the files because he believed the world was going to end in 2012 and he wanted to survive the apocalypse.

Their verdicts came on the fifth week of proceedings against him.

The first charge which Ward was convicted of stated that between February 26, 2011, and November 21, 2014, he did “with the intention of committing acts of terrorism, engage in conduct in preparation of said acts”.

The second charge stated that on the same date, Ward did “collect or make a record of information of a kind likely to be useful to a person committing or preparing an act of terrorism.”

Prosecution lawyer Richard Goddard told the court that Ward had been previously jailed at the High Court in Edinburgh on another explosives charge.

He said: “He was convicted at the High Court in Edinburgh on October 30, 2012, on a charge of contravening the 1883 explosives act. 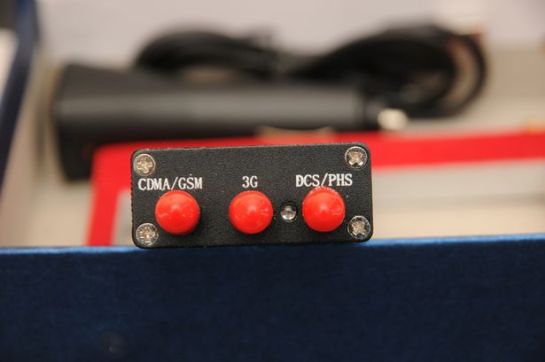 The neo-Nazi had obtained a mobile phone signal jammer

“He collected the chemical constituents of a bomb. His motivation then was to harm his father.”

Mr Goddard also told the court that Ward was given a 22 month jail sentence in April 2015 for possessing a stun gun.

He was also convicted in July 2016 of having an “improvised” knife whilst serving that prison sentence and given another 18 months.

In August 2016, the court heard how Ward was sentenced to another four months for assaulting somebody whilst in custody.

This would limit the ability of Ward to reoffend following his release from prison.

Lord Burns adjourned sentence on Ward for the court to obtain reports on his character.

He said: “In light of the verdict of the jury and your previous convictions, I am going to call for a report on the risk you pose to members of the public.”

Ward first came to public attention after he was jailed for three years in December 2012. He had pleaded guilty to making threats and possessing an explosive substance in suspicious circumstances.

The High Court in Edinburgh heard that Ward told police that he bore a grudge against his father, who had a child with his previous ex girlfriend.

Ward said “voices in his head” were telling him to kill his dad.

When detectives raided his house, they found chemicals together with items for making bombs.

Nearby houses had to be evacuated.

Passing sentence, judge Lord Uist said: “It is clear that you harbour a deep hatred for your father as you told the police that it was your intention to kill him and also yourself by means of a bomb.”

When Ward was released from that jail term, police continued to monitor him. And in November 2014, officers raided Ward’s property after receiving a tip off that he had purchased a stun gun from abroad.

Upon arriving at the property, detectives found the stun gun, which was disguised as a torch, hundreds of knuckledusters and knives.

PC Richard Roach, 34, was one of the officers who searched Ward’s property.

He told the court that material including deactivated bullets, rocket tubes and 500 steel ball bearings were found there.

When Mr Goddard asked PC Roach about the significance of the ball bearings, the officer replied: “Items like this can be used in pipe bombs – that’s why it was seized.”

Computer expert James Borwick was asked by detectives to search a USB stick and a laptop belonging to Ward.

Police then became alarmed at the discovery of files on the computer. 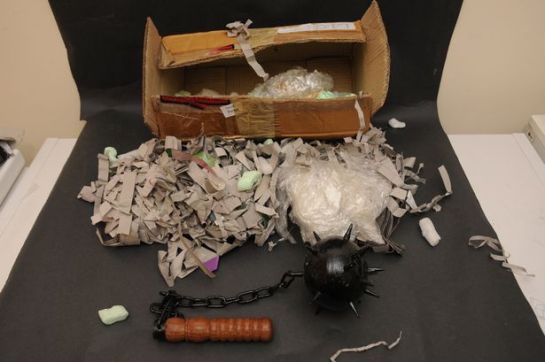 Detectives formed the conclusion that Ward was planning to commit terrorist attacks as a so called “lone wolf”.

The computer expert also said that some of the Google searches made on Ward’s laptop included phrases like ‘fake police warrant cards,’ ‘How to Make a Flash Grenade’ and ‘How to Make Inert Bullets work’.

Mr Borwick told the court that the computer contained the TOR Internet Browser – which he said gave Ward the ability to surf the dark web and to potentially look at sites which sold guns and explosives.

He also downloaded tens of thousands of documents from the internet detailing military and survival techniques.

Some of the files had titles like ‘AK47 Assault Rifle Operator Manual’ and ‘Dragonov 7.62mm SVD.pdf’.

Other titles downloaded by Ward onto his computer included ‘Techniques of Silent Killing’ and the ‘White Resistance Manual’.

Professor Matthew Feldman, 41, was asked by the police to analyse the content found on Ward’s computer.

The academic, who specialises in studying extreme right-wing political groups, said he found that Ward had a total of 2,043 ‘extreme right wing’ punk rock songs on his computer.

Mr Feldman said he found that Ward had downloaded a 214-page copy of Mein Kampf by Adolf Hitler.

Ward also had a copy of book called the Turner Diaries which tells a story about white people who start a war against other races.

The court heard that David Copeland read the book before starting a bombing campaign in London in 1999 and that the FBI consider the novel to be the “bible” of neo-Nazism.

Professor Feldman said he believed that Ward was an “exemplary” neo-Nazi.

Officers feared that with the information, Ward was going to launch an attack – perhaps on mosques close to his home in Aberdeen.

Ward admitted in court that he was a “white supremacist” who was “definitely” anti-Jewish.

He also said that he was also against “Jihadi” Islam.

But he denied suggestions that he was planning a terrorism attack.

Ward claimed that he was suffering from mental illness at the time he downloaded 19,000 documents about firearms and another 22,000 files on ‘survivalist’ techniques.

He told defence advocate Drew McKenzie that he did this because of his poor mental health.

“I stockpiled weapons. I taught myself survival techniques.”

When Mr McKenzie asked him why he needed to learn these techniques, Ward replied: “If the end of the world was gonna come, I was gonna be a survivor – there would be other people trying to survive as well.

“We’ve all seen films about the apocalypse. Violence is rife. It would be either kill or be killed.”

In cross examination, Mr Goddard pointed out that one of documents found on Ward’s computer was called “Combat 18 British Mosque Address Book”.

The dedication on the book read: “The book is dedicated to all that follow Mohammed and the Islamic faith. You will all soon suffer your demise.”

Mr Goddard said this indicated that Ward wanted to carry out a terrorism act.

Mr Goddard said: “What do you think of Adolf Hitler?”

Ward replied: “I think he made mistakes. He wasn’t right in every aspect.”

But Ward denied he was planning to carry out terrorism attacks.

Speaking about the Combat 18 book, Ward said the title was a “working one”.

He added: “That’s how it sounded in my head. To me at the time that phrase was not a threat in the way you are making it sound.”

In the end, the jurors refused to believe Ward’s story.

Ward is expected to be sentenced at the High Court in Glasgow on April 11.