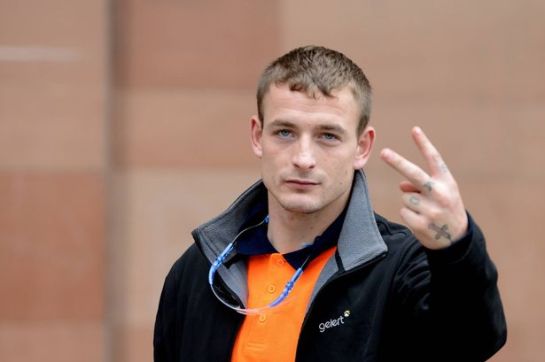 Kieron Wright, 23, from Sunderland, who posted vile racist slurs about his nurse on Facebook

A patient posted shocking racist abuse on Facebook about a nurse who was looking after him following an overdose.

Kieron Wright had been admitted to Sunderland Royal Hospital after taking an overdose, the Chronicle Live reports .

A court heard he posted a message on a public forum complaining about being moved to a different ward and making vile comments about a female nurse.

“If anyone was thinking about popping in with fruit, leave the bananas in the house, I don’t fancy getting robbed. Ha.”

Newcastle Crown Court heard a member of staff at Sunderland NHS Trust spotted the “gross racial slur” and contacted police.
NNP Kieron Wright, 23, from Sunderland, who posted vile racist slurs about his nurse on Facebook
Wright had overdosed and was being treated

Now Wright, who said he was sorry and wasn’t thinking straight due to his overdose, has been spared jail after he admitted sending an offensive communication.

Mr Recorder Morris told the 23-year-old: “That was a deeply offensive message to post on a public forum.

“I have no doubt anyone who read it would have been disgusted by what they saw. Such language is entirely unacceptable.

“This was not just a message sent to one individual but was widely disseminated to the public.

“It was plainly a racially motivated offensive message and that is a serious aggravating factor in this case.”

Wright had ended up in hospital on the evening of March 10 this year.

The deputy head of corporate affairs at the local NHS Trust became aware of what he had written on Facebook during his stay.

Wright was interviewed by police and said he didn’t realise it would offend anyone and was sorry.

Alec Burns, defending, said: “He is very sorry about the communication offence.

“He couldn’t see it at the time but she was helping him. He didn’t understand at the time because of the state he was in. He apologises.”

The court heard his 47 previous convictions include daubing graffiti on the walls of a police cell calling a man with an Asian-sounding name a “nonce”.

Wright also admitted assaulting a man in an unrelated offence because he wasn’t happy with the quality of cannabis he had been sold.

He had also failed to comply with a previous community order.

For the racist Facebook post and the assault, Wright was sentenced to a community order for 18 months, with rehabilitation and supervision requirements.

He was also given a restraining order to keep him away from the assault victim and his girlfriend.

Mr Burns said Wright has a history of mental health problems but has recently started working.