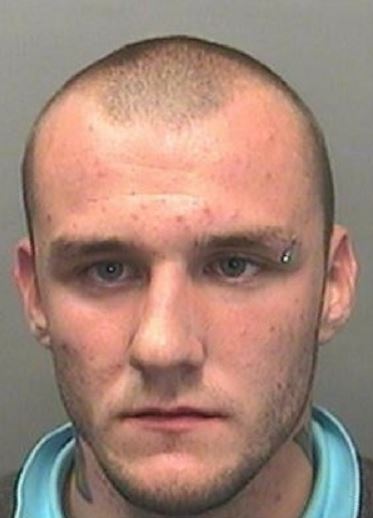 A FATHER-to-be who attacked the mother of his unborn child has been jailed for 16 weeks.

Jack Powell stubbed out a cigarette on the shoulder of his former partner before hitting her across the head with an electronic tablet when he flew into a rage on Sunday night.

Swansea Magistrates’ Court heard today that the 22-year-old had appeared calm when he turned up at her home, and she felt confident to let him in despite the can of Fosters lager in in his hand.

He had wanted to discuss a recent argument with the woman, who had recently found out she was pregnant with his baby.

“All of a sudden his demeanour changed and he started to say horrible things like she had used him to have a baby,” explained Alex Scott, prosecuting.

“He extinguished a cigarette on her shoulder and she asked him to leave.

“He hit her across the head with an electronic tablet and she screamed, hoping to attract someone’s attention.”

During the attack he also damaged several parts of the home.

His former partner fled the house and called police.

Powell, of Bedford Street, Morriston, was arrested the following morning and answered ‘no comment’ to police questions.

Matt Henson, in mitigation, asked the magistrates to show leniency and give “due credit” to him for pleading guilty.

The court heard he had previous convictions for assaults.

“We find the offences are so serious that only a custodial sentence can be justified,” Magistrate Ross Evans said. “It was an attack in a domestic setting and it was a sustained attack.”

Magistrates explained they had reduced the sentence after his guilty plea, but ordered him to pay a total of £500 in fines, compensation and court fees.