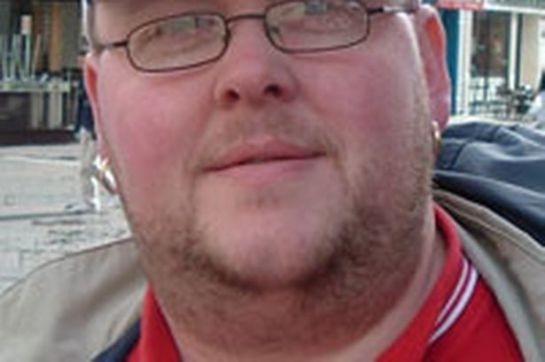 But today the Sunday Sun exposes him as nothing but a vile paedophile.

A worshipper of Hitler and the far right, the hulking 43-year-old strutted around as a henchman for extreme organisations.

His North home was a sickening shrine to the Nazis with displays of Swastikas, an SS flag and even a cannister of Zyklon B – the cyanide gas used to kill millions.

But behind this swaggering macho image hid his other horribly twisted obsession – a hateful passion for the abuse of little boys and girls.

For Cowen had a horrifying picture library of tens of thousands of indecent images of youngsters stored on his computers.

The secret stash of shame was discovered after he ordered extremist CDs by racist “Blood and Honour” rock groups.

Undercover officers intercepted them on their way to Cowen’s home in Losh Terrace, Walker in Newcastle’s East End.

The disks included bands with names like Ethnic Cleansing and Hate Crime, and featured tracks such as “Freezer Full of ****** Heads”, “Multicultural Take Over” and “Make Them Die Slowly”.

Also in the stash were CD sleeves, with pictures of human remains, beaten and battered bodies, and people who appeared to have been shot, as well as swastikas.

Accepting the delivery on December 7, 2009, Cowen asked the undercover officer about sending the packages on to Germany.

Shortly afterwards, police with a warrant searched his home and seized the CDs. They also found 11,000 MP3 tracks on his computer of similar songs, and the Nazi memorabilia.

The 17,058 pictures and 215 videos featured boys as young as six and included images classed as level five – the most serious level.

Investigations revealed during 2009, Cowen used filesharing software and a social network sites to contact other perverts and up and download images of children, including some he made himself.

Dubbing himself “Spaceapple” or “Derek” he offered to swap pictures and videos and discussed sinister fantasies including “snuffing out” boys – killing them in a sexual way and filming it.

He uploaded a total of 626 indecent images and seven videos.

In interviews with police, Cowen – who has a tattoo of the number 88, which represents the alphabet placing of HH for Heil Hitler – said he was a National Front member and enjoyed the music of white supremacist bands.

He described himself as a “white nation soldier” and said a friend in Germany had asked him to order the CDs, which he planned to send on.

But he was caught out by one of the pictures, where he was visible as the photographer, reflected in a mirror.

Defending, Mark Saunders said Cowen was “socially isolated” and had been involved in the far right movement since he was at school.

Judge Paul Sloan QC told him: “You have a long involvement with extreme right-wing and neo Nazi groups. You have admitted acting as a henchman for a group.

“The racially inflammatory CDs and written material which were delivered to your home address are of a particularly vile and offensive nature.

“The indecent images were of young children aged six years old and up, and predominantly of boys. It is clear that some of the victims were being subjected to truly awful sexual abuse. These offences are so serious that only a custodial sentence is justified.”

After the hearing Det Chief Insp Dave Anderson, said: “There is no place for such extreme views which spread hatred in our communities and we’ll continue to investigate and prosecute anyone involved in such activity in an effort to bring them to justice.”

And Det Sgt Chris Wilson, added: “During the execution of a search warrant at Cowen’s house computer equipment was seized and analysed which uncovered child pornography offences. He was subsequently charged with making, possessing and distributing indecent images of children after thousands of images and videos were recovered.

“Offending of this nature is taken very seriously and I’m pleased such a dangerous man as Cowen has been jailed for his crimes.”

NEIGHBOURS described Cowen as a loner who tended to keep himself to himself.

But they were shocked to discover what went on behind the closed curtains of his terraced home.

Meanwhile, relatives of the 43-year-old said they have totally disowned him because of the shame he has brought on their family.

“The police were here for about three days when they came to arrest him,” said Nicola Farrier-Carr, who lives just a few doors away from where the pervert lurked.

“At first people though it was for racism – he tried to play it down, he was being targeted. But then my sister was warned by social services to keep away from him, and we realised it was something much worse. I stopped letting my kids play anywhere out of my sight.”

The 24-year-old mum, who has a two-year-old son and four-year-old daughter, added: “We very rarely saw him – you might see him going to the shop or something but that was about it. He was quiet and kept to himself.”

Now, all that remains to hint at the sinister goings-on within Cowen’s modest end-of-terrace house is a solitary St George’s flag sticker in a window.

But the emotional impact will last much longer. Much of Cowen’s family has already disowned him.

“We are totally shocked and disgusted,” said one family member, who the Sunday Sun agreed not to name. “We had no idea what he was like, he lied to us all about it, and we all feel so angry.

“He has never apologised to anyone about what he did. Prison is the best place for him.”