A further six men have been jailed for their involvement in violent demonstrations in Dover last January.

More than 70 people have been arrested in connection with the wide-scale disturbance on Saturday 30 January 2016, of whom 26 have since been sent to prison for offences ranging from violent disorder and affray to criminal damage and possession of an offensive weapon.

A further 27 have been charged and have court appearances scheduled for the weeks and months to come, while detectives continue to make further arrests and investigate other offences committed on the day.

On Thursday 25 August the following men were sentenced at Canterbury Crown Court:

James Whitbread, 39, of Mooring Road, Rochester, was jailed for four years after being found guilty of violent disorder. He was seen on footage covering his face and throwing items towards opposition protestors. He also assaulted a man.

Deaton Whitbread, 22, of Mooring Road, Rochester, received a three-year custodial sentence after being found guilty of violent disorder. He was filmed throwing an item at opposition protestors and breaking through a police cordon.

Roy Price, 51, of Bagleys Spring in Romford, Essex, was sentenced to two years’ imprisonment after admitting violent disorder. He was caught on camera shouting at and pushing two police officers, and also threw objects including a brick at opposition protestors. He must also serve an additional six months in prison after CS gas and a quantity of drugs were found during a search of his home address.

Nicholas Cullin, 40, of Robins Path in Benfleet, Essex, was jailed for two years after pleading guilty to violent disorder. He was seen on footage throwing objects including a bottle at opposition protestors, and engaging in other general violence.

Richard Williams, 31, from Bryngwran in Anglesey, Wales, received a two-year custodial sentence after admitting violent disorder. He was filmed kicking a man who was already being assaulted by a fellow protestor, as well as throwing objects at others.

Nathan Waller, 18, of Maes Meurig in Anglesey, Wales, was sentenced to two years’ imprisonment after pleading guilty to violent disorder. He was caught on camera assaulting a man with a number of other protestors.

Detective Constable Kirsty Bricknell of Kent Police said: ‘Today marks the highest number of offenders sentenced on one day since the investigation into offences committed on 30 January began, and I am very happy with the results.

‘These six men contributed to some of the most appalling violence I have ever witnessed, causing a great deal of anguish for the people of Dover who were unfortunate enough to have had their town identified as the location for these demonstrations.

‘Kent Police has a statutory duty to facilitate peaceful protest but it has become obvious that many of those who attended on the day had no intention of doing anything other than fighting with those who held differing opinions to themselves.

‘Their behaviour was unacceptable and I hope these results send a clear message that such criminal actions will not be tolerated in Dover or anywhere else in Kent.’ 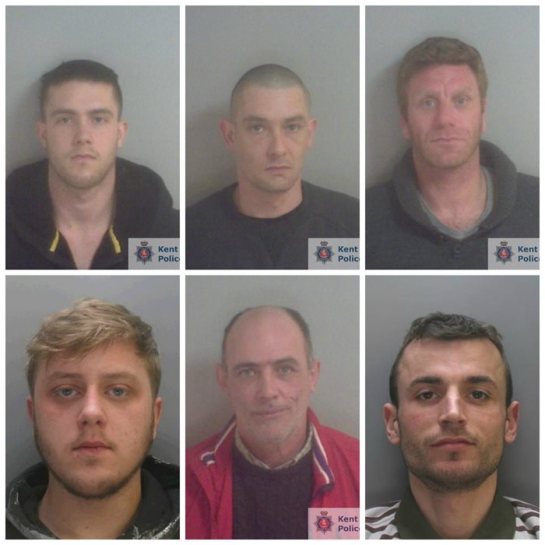 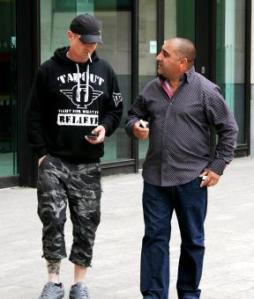 Salvatore Allegro, 48, and James Whitbread, 36, were both found guilty of a racially aggravated public order offence for beating up a Muslim at a tube station.

The men verbally abused Ahmed Farhan, telling him to “go back to your own country you f***ing Muslim c**t.”.

When Farhan got off the train at Bank station the two men followed him, shouting anti-Muslim abuse before punching him repeatedly. Both men were given a six month prison sentence, suspended for 18 months.

They were also both banned from engaging in any EDL activities, meetings or protests for 18 months.

Allegro was made to carry out 120 hours unpaid work while Whitbread was given an 18 month supervision requirement..The duo must each pay Mr Farhan £100 compensation as well as prosecution costs of £150.