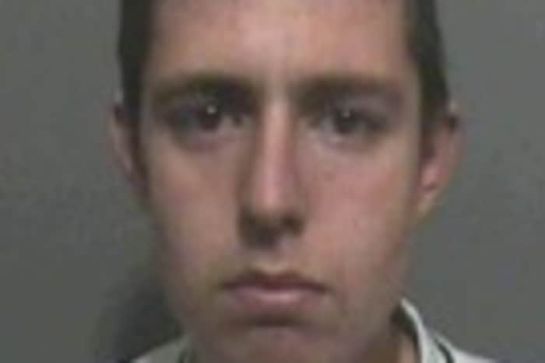 A DRUG addict who robbed a college lecturer at knifepoint has been jailed.

Craig Gilroy, 23, of Ribble Road, central Blackpool, took cash, an iPhone and food from his victim when he pounced on the man in an alleyway at the back of a mini market on Palatine Road.

The thug pleaded guilty to robbery at Preston Crown Court yesterday, and was jailed for two years and eight months.

Louise Whaites, prosecuting, said Gilroy approached his victim on November 3 and was holding a glinting eight inch bladed knife by his waist.

Gilroy demanded money, but the lecturer, who was walking home from Blackpool and the Fylde College university campus on Palatine Road, said he did not have any.

Miss Whaites told the court: “The defendant pushed him against the alleyway wall, raised the hand holding the knife and held it to his neck and again requested money.”

He waited in the alley until Gilroy had rejoined two other men and moved away from the area, and became extremely distressed when he arrived home.

Gilroy, who was wearing a hooded top at the time, with a scarf up to his nose, later sold the mobile for £20 and bought two bags of heroin.

The thief, who has 65 previous offences on his record, told his partner he had “jacked some guy”, but denied the offence when questioned by police.

Paul Humphries, defending, said his client accepted using the knife to threaten, but denied any intent to use it to cause harm. He also denied threatening to kill the man if he went to the police.

Mr Humphries said: “He tells me he is very sorry. He understands the pain and misery he has caused the male and his family.

“He wishes he could turn the clock back. He was at a low point in his life.

“There was also a food shortage in the house.”

Gilroy had also been on a methadone programme but was not attending at the time.

Judge Philip Butler said: “It must have been a terrifying experience for the man.

“That he suffered no physical injury is very little mitigation because one can imagine the psychological effect”.

A thief who was short of money in the run up to Christmas targeted the same shop two days running.

He was given a 12 months conditional discharge and ordered to pay £47 compensation with £85 costs plus £20 victims’ surcharge.

Prosecutor, Pam Smith, said Gilroy was detained at the B and M Bargains store, Whitegate Drive, on December 23 at noon, after stealing three jars of coffee valued at £14.

CCTV showed he had been in the shop the day before and taken four bottles of liqueur worth £47.

He had a record of 29 previous offences of theft and similar matters and at the time of the offence was on post prison sentence supervision.

Howard Green, defending, said in the run up to Christmas his client was short of money and decided to steal to get some. Gilroy, who had been diagnosed with bi-polar disorder, was estranged from his family.

He had no permanent accommodation but was allowed to sleep at the address he had given.

He had also missed appointments with the probation service on his post prison sentence supervision.

A prisoner apologised after making loud banging noises from his cell under Blackpool Magistrates’ Court which could be heard in the courtrooms.

He was sentenced to a six months community order with up to 15 days rehabilitation to be supervised by the probation service, banned from entering Marks and Spencer, Church Street, for six months and ordered to pay £35 compensation with £85 costs plus £85 victims’ surcharge by District Judge Jane Goodwin sitting at Blackpool Magistrates’ Court.

Prosecutor, Andrew Robinson, said Gilroy took a woman’s jacket worth £35 from Marks and Spencer on September 16 at 10.15am.

He was chased but got away.

At midday security officers spotted him and when he was apprehended Gilroy was found to have five jackets valued at £175 from Marks and Spencer which he had stolen just minutes earlier.

Gilroy at the time of the thefts was on licence from prison.

He had a criminal record of 99 previous offences.

Brett Chappell, defending, said his client had stolen from Marks and Spencer because his benefits had not yet been in place and he had been using Spice.