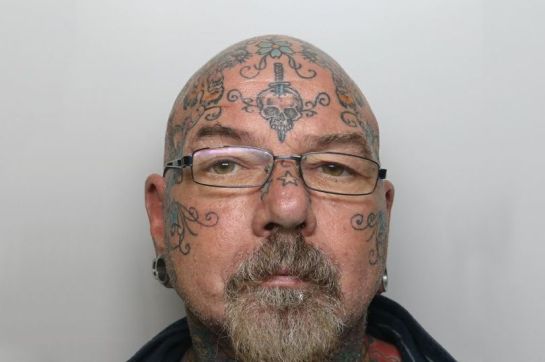 This racist who was previously jailed for peppering lamp posts and bus stops with Neo Nazi stickers, has now been sent back to prison after police found cans of CS gas at his home.

Southern Derbyshire Magistrates’ Court heard how officers uncovered the banned spray when they went to the home of David Holmes, in Heanor, on June 12.

The heavily-tattooed 63-year-old, who has an infatuation with the Far Right pleaded guilty to four counts of possessing a weapon designed or adapted for the discharge of a noxious liquid.

The magistrates who jailed him for 26 weeks told him “it has to be custody because these are very serious matters”.

In August, Holmes was jailed for a year after he pleaded guilty to a number of charges including racially aggravated harassment, racially-aggravated criminal damage and witness intimidation.

On that occasion Derby Crown Court heard how he placed the offensive stickers around Ilkeston, Heanor, Mapperley, in Shipley Park and on the Nutbrook Trail during 2019.

Siward James-Moore, prosecuting on that occasion said police received a number of complaints about them including one from the head teacher who saw one placed on a lamppost outside his primary school.

Mr James-Moore said: “Some said ‘deport illegal immigrants’ and other showed an emoji of Adolf Hitler with a hand written note which read ‘Muslim scum out’ and ‘Hitler was right’.

“More of the Hitler stickers were found around Heanor and Langley Mill and were forensically analysed and linked to this defendant through a fingerprint.

“Another sticker was found on a bus stop and showed a white toddler with a shaved head and the number 88 on it which is a link to a far right ideology linked to Hitler’s birthday and the letters HH for ‘Hiel Hitler’.”

Mr James-Moore said Holmes was arrested at his home address in Ashforth Avenue, Marlpool, Heanor and a number of items were seized.

He said this included letters from a far right movement the defendant is a member of congratulating him for “a nice job in Heanor” and to “keep up the good work”.

In August the hearing was told how Holmes also displayed a Klux Klan figurine from his window and put bottles of his “potent” home made wine on neighbour’s doorsteps.

On them were written more racist slogans and one celebrating Klaus Barbie, a Gestapo officer known as the Butcher of Lyon and who tortured and killed Jews during the Second World War.

Mr James-Moore said: “In interview, the defendant was upfront and frank telling police he had placed more stickers around Shipley Park and on the Nutbrook Trail.

“He said his views were the normal views of people living in the area and were not offensive.

“He said he had issues with extensive immigration and what he called the ‘dilution of Aryan blood’.”

Jailing him on that occasion, Recorder Stuart Sprawson said: “You have deeply-held entrenched views about other people of different ethnicity to you.

“One of the people to complain was the head teacher of a primary school concerned about the impact this would have on the pupils and totally against the views being taught there.”