Alison Chabloz, 55, posted at least 50 times on her website over the past year
Convicted in June last year for suggesting the Holocaust was a ‘bunch of lies’
She has been sentenced to eight weeks in prison and given a fine of £175

An anti-Semitic blogger who wore a white supremacist badge as she was convicted of broadcasting ‘grossly offensive’ songs has been jailed for illegally posting to her blog.

Alison Chabloz, 55, posted ‘at least 50 times’ on her website over the past year – a ‘clear breach’ of the terms of her suspended sentence.

Chabloz was convicted in June last year for writing three vile songs mocking the Holocaust, which she sang and uploaded to YouTube.

The songs suggested the Holocaust, which saw six million Jews killed by Nazi Germany during World War Two, was a ‘bunch of lies’ and referred to Auschwitz as a ‘theme park’. 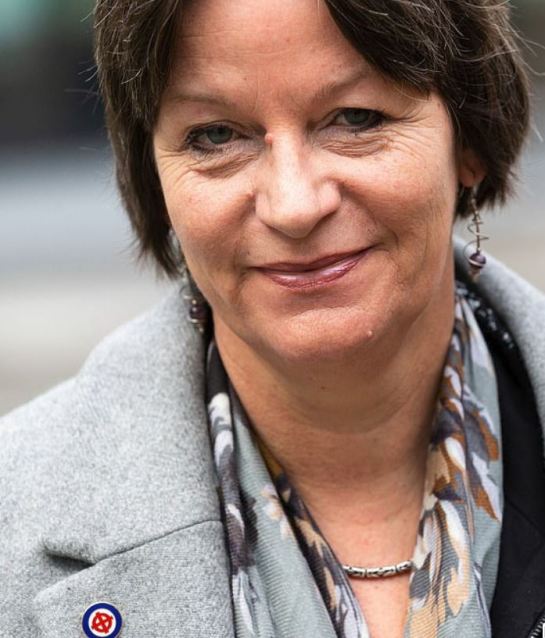 Chabloz was convicted in June last year (pictured wearing a white supremacist badge as she arrived for her trial) for writing three vile songs mocking the Holocaust, which she sang and uploaded to YouTube

She also mocked Anne Frank and laughed during her trial last year as the court heard how she mocked Jews being fashioned into lampshades, having their heads shrunk and being turned into bars of soap.

She was given a suspended prison sentence and banned from social media for 12 months.

Today, Chesterfield Magistrates Court heard that Chabloz had breached the order by posting to her personal blog, despite advice from probation officers not to do so.

The CPS highlighted three specific breaches of the order, but Chabloz herself admitted posting to the website more than 50 times.

Giving evidence to the court, Chabloz said she did not feel she was breaching the order as she believed her blog, hosted by WordPress, was distinct from social media.

She also argued that because she disabled the comments on her blog, there was no ‘social interaction’ between herself and people who viewed the content.

The court heard that the blog is Chabloz’s sole source of income as it allows people to donate if they like her content.

When prosecutor Ian Shaw asked Chabloz if she considered people donating to her ‘interaction’, she replied: ‘It’s not really social interaction.

Steven Brown, of the probation service, told the court he had advised Chabloz not to post to the website.

But, he added, she was ‘quite forthright’ that she did not believe the order included her blog.

Chabloz appeared in court supported by her parents and four far-right sympathisers.

She was defended by Adrian Davies, formerly of the British Democratic Party, who has previously represented high-profile Holocaust denier David Irving.

Mr Davies told the court he felt the wording of the order was ‘narrow’ and that it was not clear to Chabloz the ban extended to her personal blog.

‘It is used to create content to be viewed and, if wished, shared.

‘I am quite satisfied the order was clear.

‘Mrs Chabloz has chosen to embark on a course of conduct without advice.’

He imposed eight weeks of the suspended sentence and fined Chabloz £175, to be paid within ten weeks.

He told her she will serve half of that sentence, on the condition that she works with the probation service.

Speaking after sentencing, Mr Davies, said he was ‘surprised’ the judge had found her guilty and insisted he would appeal the decision.