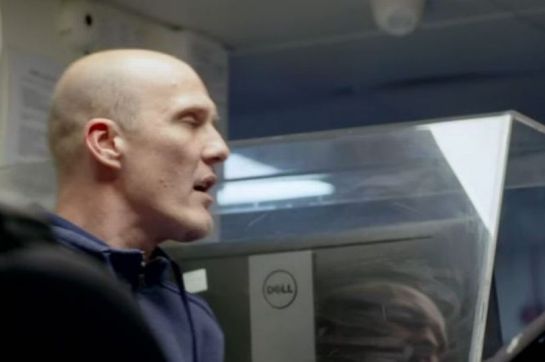 The sentence given to a racist who hurled vile abuse at a black police officer has been branded “pathetic” after the shocking incident was shown on last night’s episode of Call the Cops.

Viewers were given a glimpse of the abuse suffered by police officers working on the front line in the third episode of the Channel 4 show.

Officers Sam and Josh were filmed responding to a hostile incident involving a couple at an address in Plymouth.

Viewers watched in horror as Michael Westwood made repetitive references to the colour of Sam’s skin, along with references to an Islamaphobic organisation during a prolonged verbal attack.

Westwood was arrested for a racially aggravated public order offence.

Following the show, Devon and Cornwall Police revealed the sentence handed to Westwood, who failed to turn up to his sentencing hearing.

In a tweet the force said: “For those who watched episode three of #CallTheCops, Michael Westwood was charged and pled guilty to a racially aggravated public order offence.

“He didn’t appear at the hearing which took place at Plymouth Magistrates’ Court in August,

“Victim compensation was set at £50.

Viewers were quick to hit out at the sentence, branding it “pathetic”, “disgraceful” and “shameful”.

One said: “And this is why criminals don’t give a toss, no consequences. That guy made me, just a normal white guy, feel ashamed of my so called fellow race.”

Another added: “Is that it?! So he probably doesn’t have a job and WE will end up paying it. Not a deterrent at all that is it?! Sad times.”

Many felt the offence justified a prison sentence.

One person tweeted: “That is a shameful. That guy deserved jail time.”

While a second viewer wrote: “Should have been jailed for at least 5 yrs…no wonder crime is rife….no punishment!”

There was also widespread support and praise for Sam, who revealed the force had offered to take him off the front line in order to protect him for abuse.

Speaking about the racial abuse he has received throughout his career, Sam said: “In all seriousness, I have lost count of the amount of times I’ve been racially abused.

“Peoples attitude towards race had on the whole got better, with the exception of three years ago when the political world started to change.”

Sam went on to admit that the force gave him the option of leaving the front line, in an attempt to stop the racial abuse.

“In 2016 the force legal team, their concern was my welfare,” he said.

“My response to that was I joined the police to be a response officer and work on the front line. If someone racially abuses me because of the colour of my skin, I’m not the one who has the problem, they’re the ones that have the problem.

“They’re the ones that are going to have to learn that black police officers, male or female reflect the society we live in and we make society safe.

“That was the message I wanted our senior management to be aware of.”