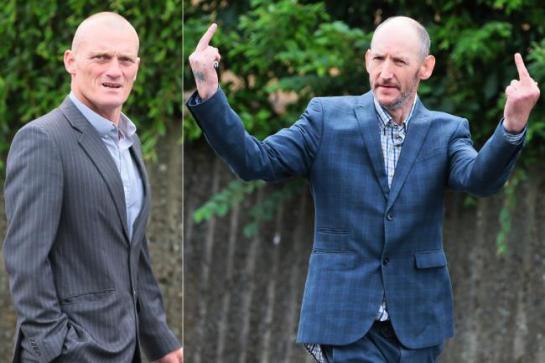 TWO men “deliberately targeted” the office of Helen Goodman MP in a politically motivated attack by throwing bricks through the windows, a judge has said.

Colin Dodds and Alan Dent have today been jailed after they were convicted of causing criminal damage to the Bishop Auckland MP’s office.

District Judge Helen Cousins has sentenced Dent to eight weeks and Dodds to 12 weeks in custody.

This morning, Dent, 50, of Co-operative Street, Shildon, admitted a charge of causing criminal damage after losing his temper and throwing a brick through a window.

And Dodds, 44, of Douthwaite Road, Bishop Auckland, denied the charge, but he has been found guilty of the offence.

The judge said the pair had deliberately targeted the MP’s office.

She said: “I saw two men walking down the street in a determined way with bricks in their hands and low and behold windows were then smashed.

“I have no hesitation in finding that it was deliberate – there can be no other reason than it being politically motivated for them to chose that building. This was a targeted attack on a sitting MP’s office.”

Teesside Magistrates Court heard how the pair had been supporters of far-right organisations, including the English Defence League (EDL) and had been subject to police surveillance while taking part in Anti-Islamic protest marches across the region.

Dent had told the court that he was ‘fully’ responsible for the damage but denied it was politically motivated maintaining that he lost his temper after spending the day drinking in Bishop Auckland town centre.

He said he was angry after seeing his ex-partner in town and got into an argument with a friend before picking up the bricks and threatening to ‘smash his head in’.

Dent told the court that his co-accused grabbed a brick out of his hand to stop him attacking their friend.

Under cross examination from Ann Mitchell, prosecuting, Dent said: “When I found out he (Dodds) had been arrested, I wanted to come to prove my guilt and prove Colin’s innocence.

“He stopped me doing something worse when he took a brick off me.”

She asked Dent whether he came to court to plead guilty and keep Colin Dodds out of trouble, he said: “It definitely wasn’t a planned attack, I was in my best clothes, it was broad daylight and I was drunk.

“He had absolutely nothing to do with it.”

Two windows at Ms Goodman’s constituency office on Cockton Hill Road, Bishop Auckland, were broken after being hit with house bricks on the evening of Saturday, April 6.

Dodds denied the attack was related to Ms Goodman’s stance on Brexit. He said: “I had no prior knowledge of it before it happened; it wasn’t planned and I had nothing to do with it.”

Under cross examination, Dodds vehemently denied hurling a brick through the window and maintained they were walking to his home on the Woodhouse Close estate.