A FAR-right supporter who set fire to Newport’s Masonic Lodge and Bassaleg secondary school, and daubed swastikas and racist slogans on buildings across the city, has been jailed for a total of six years. 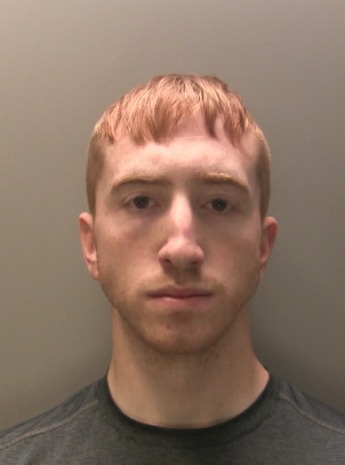 Austin Ross, 23, carried out the two arson attacks and his spree of hate-fuelled criminal damage during May this year.

The Riverfront Theatre, Maindee primary school, Gwent Probation Service’s Lower Dock Street offices, and the Bethel Community Church were among his other targets.

Ross, of Romney Close, St Julians, Newport, carried out the attacks, said Judge Jeremy Jenkins, “out of sheer hatred and malice”, based on a “perverted view of race and religion”. 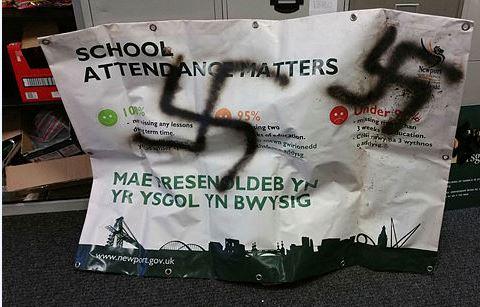 He began by sticking a racially offensive poster,, and spray painting a swastika, on a window at the Riverfront Theatre in Newport, between May 2 and May 5.

The poster, along with several others Ross subsequently stuck to buildings in Newport, referenced the neo-Nazi System Resistance Network (SRN).

On May 4, the Bethel Community Church was targeted with posters and swastikas, as was Maindee primary school, where parents removed posters and handed them in to the school.

The school was targeted again on May 8 and May 25, but Ross had in the interim stuck posters and daubed swastikas on a wall at the Newport Centre.

Between May 25-30 he targeted the Gwent Probation Service building on Lower Dock Street with a spray painted far right message.

And on May 28, racist graffiti and a swastika were daubed on a wall at the University of South Wales campus on Usk Way.

Ross’ criminal activities then took an even more sinister turn.

On the night of May 28 he posted a flammable liquid through the letterbox at the Masonic Lodge in Lower Dock Street and set fire to it – an act caught on CCTV – causing £38,000 of damage.

And on the same night he caused around £20,000 of damage to a classroom at Bassaleg School after setting fire to a window blind.

Both buildings were also daubed with racist graffiti.

Police issued CCTV images of a man clad in black clothing, to try to track down the perpetrator.

Acting on a tip-off, they arrested Ross at an address in Grosvenor Road, Bassaleg, on June 5.

The Bassaleg and the Romney Close addresses were searched, and items found included cardboard swastika stencils and neo-Nazi posters.

Defence counsel Harry Baker said several references submitted on behalf of Ross showed “a different side” to him.

But sentencing him, Judge Jenkins was scathing of Ross’ crimes.

“You daubed swastikas and other highly offensive literature on schools, a church, a theatre, a footbridge and other buildings,” he said.

“You deliberately set fire to the Masonic Lodge and Bassaleg secondary school.

“Your actions were not born of some mental disorder, but out of hatred and malice based upon your perverted view of race and religion, and others dissimilar to yourself.

“That, in a civilised society is as abhorrent as it is impossible to comprehend.”

Ross was sentenced to three years in prison on each arson charge, to run consecutively.

He was also sentenced to six months on each of 13 charges of racially aggravated criminal damage. These will run concurrently to the arson sentences.

Speaking after the senetencing hearing, Detective Chief Inspector Nicholas Wilkie, of Gwent Police, said: “The offences committed by Ross in Newport in May of this year were very serious, and understandably resulted in concern and distress throughout our community.

“There is no place for hate crime in Gwent, and we will continue to take a zero tolerance approach to this type of offending.

“We are committed to ensuring our neighbourhoods are welcoming and safe places for everyone, and any crime motivated by racial, sexual, or any other prejudice, will be investigated thoroughly and any offender dealt with robustly.

“We would encourage anyone who has experienced or witnessed an incident or crime that they perceive to be motivated by hostility or prejudice, to report to us directly on 101 or 999, online at http://www.report-it.org or through Victim Support on 0300 30 31 982.”

Cerys Beresford-Evans of the Crown Prosecution Service, said: “Ross spread his racist messages around Newport by causing damage and destruction to buildings.

“Hate crime has no place in a civilised society and has a devastating impact on not only individuals, but on communities.

“The CPS will continue to work with our partners in the criminal justice system to address all forms of hate crime.”