The family of murdered Andrew Groves made a loving tribute to him on the day his killers were jailed.

Russell Oakey and Michael Dommett both received life terms today (July 26). Oakey, 42 and of Hanham High Street, was convicted by a jury and Dommett, 38 and of Oakhanger Drive, entered a guilty plea part way through a trial.

Bristol Crown Court heard 47-year-old Mr Groves sustained a brutal beating in a house in Oakhanger Drive, Lawrence Weston, which was then set on fire. 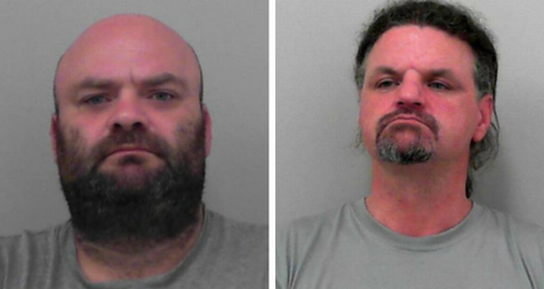 Michael Dommett (left) and Russell Oakey. Both have been jailed for life for murdering Bristol dad Andrew Groves. (Image: Avon and Somerset Constabulary)

As the case concluded Mr Groves’ family said: “The sentence these two men will get will be never enough for us as a family. For we will never see our dear Andrew again.

“Andrew was a kind and loving son, a truly beautiful person, and was loved by so many people.

“He was a hard-working and devoted family man and his sudden death has been devastating to his wife, his son Lewis and daughter Molly.”

The family also thanked the emergency services who first attended the scene, and made desperate attempts to revive Mr Groves.

The statement adds: “We would also like to say thank you to Avon and Somerset Police’s Major Crime Investigation Team, who had over 70 people working on the investigation.

“Without them and their hard work and professionalism we would not be here today.

“We would also like to say a very special thank you to three amazing people who have given us their support, compassion and help during this very difficult time – DC Hilary Bolland, DC Carol Doxsey and Krissy of Victim Support.

“Once again thank you to you all.”

Mr Groves’ daughter Molly was 17 when her dad was murdered. She said she was a “daddy’s girl”, her dad was very affectionate and would help his children with their homework.

She said: “Dad was always really proud of me and my brother.”

She remembered going to the cinema with her dad, with his large Coke and nachos, looking happy. When her dad died she felt scared and didn’t know what to do, she said.

She thought Mike Dommett had been her dad’s friend, and she couldn’t understand why anyone would want to hurt him.

She found life after the killing very difficult, she said, but wanted to attend court for the trial to hear what happened and listened to awful things. She described her dad as a family man who was always smiling.

Andrew’s father Barry said Andrew was born at Southmead Hospital and when he saw him for the first time he was the most beautiful baby he had ever seen. He last saw him four days before he was murdered and he was his “usual, cheerful self”.

When Mr Groves was told of a murder inquiry regarding his son he thought: “Why would anyone kill my son? He’s never had an enemy in my life.”

He said he had to identify him at a mortuary and even though he had sustained horrendous injuries he was still his beautiful son.

He said: “That day my life, and that of Andrew’s family and friends, changed for ever.”

Mr Groves said the sadness would live with his family for ever.

The deceased would always do anything for his children, he said, and they missed their loving, generous and hard-working dad.

He said: “I’m devastated I will never see my beautiful son again. I hope those found guilty of his murder get the maximum the court can give.”

Andrew Groves’ son Lewis was 25 when he learned of the death of his dad.

Today the court heard how he went to his dad’s home and found police at the scene. He said his dad was his best friend and they had a very special relationship. He said his dad would have been his best man at his wedding but he never got the chance to ask him. Since the murder he has felt so much negativity, he said.

He said he found it hard to look at motorbikes, knowing how much his dad liked them. He said the intention to set light to his dad was hard to hear

‘We are the ones serving a life sentence’

She said: “No-one deserves the pure evil inflicted on him. No punishment will ever be enough. We are the ones serving a life sentence.”

Senior Investigating Officer DI Lorna Dallimore said: “These convictions are the result of a detailed and painstaking investigation by officers and police staff.

“Andrew Groves was subjected to a truly horrific ordeal inside the house in Oakhanger Drive, with a fire deliberately started in an attempt to conceal evidence.

“We were able to prove Michael Dommett, who had taken on the tenancy of this property from his late father, and Russell Oakey were solely responsible for Andrew’s death.

“They concocted a series of lies to distance themselves from the scene of the crime and claimed they’d left Andrew at the property asleep.

“Through a combination of forensic and DNA evidence, analysis of telephone data and ANPR cameras, we were able to expose these lies and prove they were responsible for Andrew’s murder.

“I’d like to thank Andrew’s family for their support of our investigation and I hope these convictions will help them move forward with their lives.”