A MAN who spray-painted swastikas around the city and set fire to buildings including a school and a church over the course of a month has pleaded guilty to all charges. 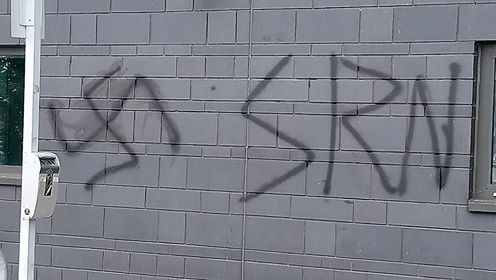 Austin Ross, 23, of Romney Close in Newport, pleaded guilty to 15 counts in total at a brief hearing in Cardiff Crown Court today.

The charges relate to a series of swastikas and racially aggravated graffiti and two arson attacks in Newport between May 2 and May 31 this year.

Two swastikas appeared on a wall and post at the University of South Wales building in Newport city centre during the late May bank holiday weekend.

Alongside one of the swastikas was a message apparently written in support of far right activist Tommy Robinson, real name Stephen Yaxley-Lennon, who co-founded the English Defence League.

He owned up to damaging the windows of the Riverfront Theatre in the city centre on May 3, the front door of the Bethel Baptist Church in Bassaleg and a school sign belonging to Maindee Primary School on May 4, as well as a footbridge belonging to Newport City Council on May 5.

Ross also targeted Maindee Primary school a second time on May 28, the Gwent Probation Service building on Lower Dock Street between May 27 and May 31, the University of South Wales Newport campus and the walls of the Masonic Hall on May 28.

Four other counts of racially aggravated harassment, alarm or distress were admitted by Ross between May 2 and May 5.

The charges read out in court noted his actions were based on the membership or perceived membership of a particular racial group.

He also admitted two counts of arson, setting fire to the front doors and hallway of the Masonic Hall in Lower Dock Street on May 28 and destroying a classroom at Bassaleg secondary school on May 29.

Judge Eleri Rees, addressing Ross’ legal representative Harry Baker, warned that the defendant was “not helping himself” by refusing to cooperate, and added she would order a psychiatric assessment before sentencing.

“A more sinister interpretation can be put on his behaviour because he has not explained his actions,” said Judge Rees.

“It does make it difficult for anybody to second guess that there might be a background that could help explain this.

“He doesn’t help himself in that way.

“I’m going to order a psychiatric assessment and we will set up a time table for sentencing.”

Addressing the defendant, Judge Rees added: “I would encourage you to try to cooperate and reflect upon what could be of assistance to you.”

Ross will now appear in court on August 21 for sentencing.