An east Hull mother who attacked a pub landlord before posting a homophobic slur about him on Facebook has been spared jail because it would be “catastrophic” for her children.

Shauna Sirrs, 23, was brandishing a glass when she attacked Craig Smith in the Wawne Ferry pub, Bransholme, after she was asked to leave.

Appearing at Hull Magistrates’ Court last month for a trial, Sirrs admitted assault but was found not guilty of sending a communication which conveyed a threatening message, contrary to the Malicious Communications Act.

In her basis of plea, the court heard Sirrs admitted being reckless when brandishing the glass but that her intention was not to use it to hit Mr Smith who suffered a cut to his forehead but did not need hospital treatment.

In sentencing Sirrs, District Judge Fred Rutherford said: “You are the mother of two young children. Sending you away would be catastrophic for your family.

“I am sure you will not involve yourself in this type of behaviour again because you know it will mean prison.”

At last month’s hearing, Mr Smith said Sirrs and her friends were asked to leave because they were smoking in the pub and being disruptive, but Sirrs claimed it was to do with being given the wrong change after she and her group bought drinks.

She admitted injuring Mr Smith with the glass but insisted she only meant to thrown the contents of the glass at him but it slipped, leaving the victim on the floor covered in blood.

According to Mr Smith, she later uploaded the pictures of the injured Mr Smith to Facebook. Once charged with assault, Sirrs took to the social media site and called Mr Smith, who is gay, a “f*****”, the court heard.

Humberside Police were called immediately after the attack and Sirrs was later charged with assault by beating. When she received her summons to appear in court however, Sirrs took to Facebook. 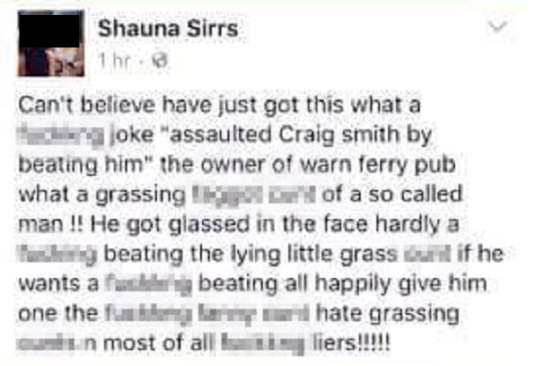 Speaking after the last month’s hearing, Mr Smith said: “We started arguing and then all of a sudden a glass came hurling my way and it smashed me in the face. I was probably no more than 30cm away from her and it hit me just under the eye.

“I fell to the ground and was bleeding everywhere. The worst bit is she found it really funny and just started taking loads of photos.”

Mr Smith also admitted the slur on his sexuality was distressing.

He said: “It was deeply upsetting. I’ve worked in the pub industry for more than 30 years and no one has ever taken issue with my sexuality. No one has ever given a damn about my personal life and they have no reason to. It just wasn’t nice.”

As well as the suspended prison sentence, Sirrs was also ordered to pay £200 compensation.