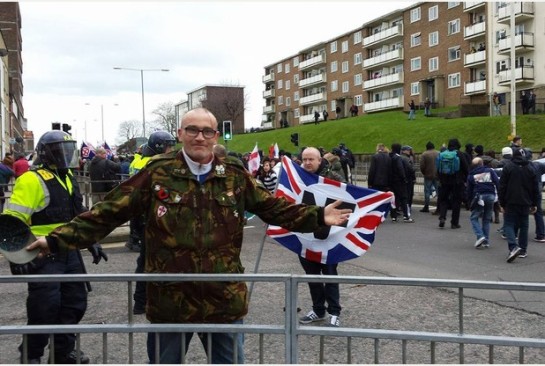 A far-right thug who threw objects at people during demonstrations in Dover in January has been jailed for two years.

Mark Pearson, 42, of The Avenue in Chester-Le-Street, County Durham, was also recorded performing Nazi salutes and acting in an aggressive and threatening manner towards police.

He pleaded guilty to violent disorder and was sentenced at Canterbury Crown Court today (Wednesday).

Pearson is one of almost 60 people to have been arrested in connection with the Dover protests on Saturday, January 30.

His actions were recorded on film and after being identified he was arrested in Durham on Thursday, March 10.

Detective Inspector Bill Thornton of Kent Police said: “I am very pleased with the sentence imposed on Mark Pearson, which I believe sends a clear message to those intent on causing trouble during such demonstrations.

“He is the eighth person to have been sentenced so far for violence committed on the day, with sentences totalling more than 11 years’ imprisonment. I am looking forward to seeing many more positive outcomes in the weeks and months to come.

“The people of Dover do not want the likes of Mark Pearson coming to their town and displaying such unacceptable behaviour, and we will do everything in our power to ensure those who joined him in committing offences on the day are brought to justice.”