Magistrates expressed surprise that no-one else was charged alongside Keith Edward Hall, 38, of Bath Street, Rhyl

A man has been given a suspended prison sentence for a firework attack on a mosque.

Magistrates saw video footage which showed Keith Edward Hall twice approaching the Islamic Centre in Rhyl, lighting the fireworks and pushing them through the letterbox on November 11.

In the background, a man and woman could be heard laughing and shouting: “Hurry up.”

Having seen the film, Prestatyn magistrates expressed surprise that no-one else has been charged in connection with the attack.

Hall, 38, of Bath Street, Rhyl, had pleaded guilty to religiously aggravated criminal damage at the centre in Water Street.

In the footage, filmed from the doorway of the Bow Bar opposite, Hall was seen approaching the mosque twice in 20 minutes.

In a victim impact statement, Rafiq Ullah, the centre’s treasurer, said the damage could have been much greater had they not taken measures to improve fire safety after a previous incident.

He said people could easily have been injured as the prayer room was behind the door.

The incident occurred only two days before the Paris shootings, and Mr Ullah said tension at the mosque was high in that period. It eased when Hall was arrested.

When interviewed, Hall said he could remember very little about the incident because he had drunk eight litres of cider and eight shorts.

He woke up the following morning with a sore arm where part of the letterbox surround had hit him when it was blown off.

He denied being a racist and claimed to have several friends from ethnic minorities.

Alex Fitzgerald, representing Hall, said he found it “astonishing” that no-one else had been charged even though they were interviewed.

Mr Fitzgerald told the court that Hall did not even realise that the building was a mosque.

“It was not born out of a deep-seated hate of the Muslim community, but was an act of utter stupidity,” he said.

“He is embarrassed at his stupidity and wishes to apologise. Alcohol affects his thinking and his behaviour.”

Hall was given a 16-week prison sentence suspended for 12 months, and must also observe a 7pm-7am curfew and attend a six-month alcohol treatment course and 25 days of rehabilitation.

The Bench made a restraining order prohibiting him from entering Water Street for 12 months. 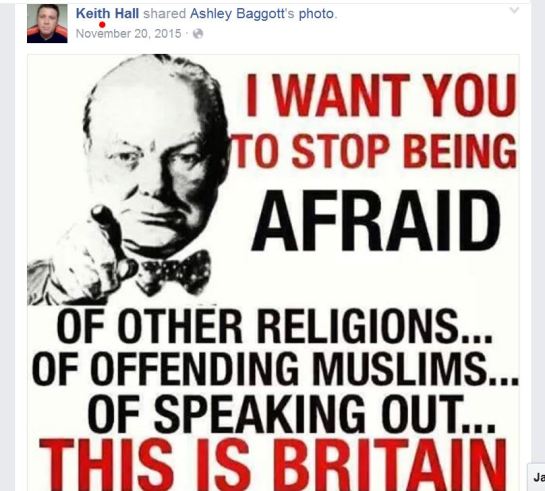