A man who admitted posting offensive comments on Facebook about an Edinburgh boy beaten to death by his mother has been jailed for 12 months.

Shaun Moth posted abuse about Mikaeel Kular on the social networking site the day before the three-year-old boy’s body was found in a wood in Kirkcaldy.

The 45-year-old posted the comments on an anti-racism page as a police search was underway for the boy in January.

Rosdeep Adekoya, 34, was jailed for 11 years in August for her son’s death.

Adekoya had originally been charged with murder, but admitted the reduced charge of culpable homicide.

Moth, from Whitehills in Aberdeenshire, pleaded guilty to conducting himself in a disorderly manner, posting grossly offensive comments on Facebook and breaching the peace, aggravated by religious prejudice when he appeared at Aberdeen Sheriff Court on 4 December.

He was sentenced at Aberdeen Sheriff Court.
‘Grotesque posts’

Sheriff William Summers said Moth had exploited the media attention around the search for Mikaeel in order to “peddle vile abuse”.

The sheriff said: “We live in a multi-racial and multi-ethnic society that remains tolerant of others.

“You are entitled to hold whatever views that you want and to hold them strongly.

“But what you said in these posts was at times grotesque.

“Anyone who disseminates this sort of material must recognise that they will be brought to justice.

“This matter is so serious it seems to be that a custodial sentence is the only option.”

Three year old Mikaeel, from Edinburgh, was reported missing by his mother on 16 January this year.

Defence agent Stuart Beveridge said his client had “strong views” and that he was abusing alcohol and drugs at the time he made the comments.

Mr Beveridge said: “He accepts that his comments were callous and in the extreme.

“He has been out of work for six years.

“He was drinking heavily and routinely using cocaine.

“He enjoys the process of argument and debate.

“He accepts that he has strong views and went too far on this occasion.” 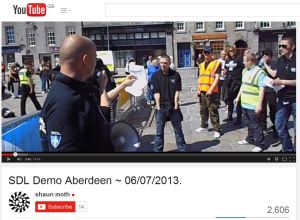