A pair of convicted fraudsters have walked free from court after being caught with disabled Tilly Lockey’s stolen bike.

The six-year-old’s mum today said her daughter had been left distraught by the “disgusting” act.

Davina Keenan Copeland and Steven Anthony Henley both pleaded guilty to handling stolen goods and obstructing a police officer when they appeared before Consett Magistrates’ Court on Tuesday.

The callous couple were visited by police on September 17, 36-year-old Copeland answered the door at the couple’s Ritsons Court home in Blackhill, Consett.

Henley, 33, was later found hiding behind a wardrobe.

“He resisted Sgt Davis and attempted to pull away shouting threats.”

The statement said: “It’s horrible to think that somebody has been through your personal belongings and taken something such a child’s toy which means nothing to them and everything to the child.

“The fact that someone has taken items from a child has confused my six-year-old.

“Tilly, my disabled daughter, has particularly found memories of that bike as it was the first bike she could ever ride and join in with her sisters.

“Even after seeing my children upset on the TV they were not going to say anything – I think that’s disgusting.”

The court heard Henley had 14 previous convictions including five counts of fraud while Copeland had also been convicted of fraud.

David Malone, defending, told the court the pair found the bike in a back street and took it.

He added: “They put it in a cupboard in the house and two days later police came.

“Both of them are absolutely appalled at the fact that it belonged to Tilly Lockey.”

Mr Malone said both Copeland and Henley were ‘disgusted’ with their actions.

The court was told the pair both had a history of mental health problems and heroin abuse after their children were taken into care.

But Mr Malone added they had both been clean since January 2014.

The pair were each ordered to pay £150 costs and a £15 victim surcharge.

The court was told Durham police provided Tilly with a new bike following the theft of her customised bicycle. 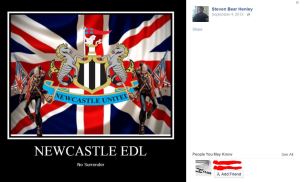