The victim of racists Shaun Marshall and Dean Bartley says “these days, you would think people would get used to black people in this country” 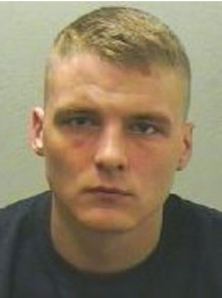 These two racist thugs left a doorman with a broken leg after attacking him because he asked them to leave at closing time.

Shaun Marshall and Dean Bartley were upset that kicking out time arrived shortly after they had bought pints and refused to leave.

Door supervisor Davison Jersey stepped in to tell them they had to go and was met with a volley of sick racist abuse.

Marshall and Bartley spat at Mr Jersey before landing a series of punches and kicks.

Graeme O’Sullivan, prosecuting, said: “It’s clear from the CCTV he continued to be aggressive, as did Bartley, towards Mr Jersey.

“Their swearing and racist abuse continued and both men spat at the door supervisor.

“Marshall punched Mr Jersey to the right side of his cheek and Bartley joined in, running round and punching him and kicking him in the legs.

“Mr Jersey hit out but both men came at him and he fell to the floor and the men continued kicking him for some time after that.”

Marshall eventually ran off and Bartley followed him after other customers told him off for continuing to shout abuse at the now injured Mr Jersey.

The doorman was left with a broken leg and bruising and swelling to his legs and hand.

Bartley, of Warkworth Crescent, Newcastle, was locked up for three years.

John Foley, for Marshall, said: “The thing that instigated the violence was they had both been served with a pint at the bar and, having paid for it, they were told to leave it and get out.

“That seemed unfair and annoyed them and they lost control.”

Jonathan Devlin, for Bartley, said: “The route of his problem is drink. The sooner he realises drinking only gets him into trouble, the sooner it will be that he no longer comes to this court.”
The doorman was knocked to the floor, where the pair continued kicking him, leaving him with a fractured fibula and bruising and swelling.

As the thugs were locked up at Newcastle Crown Court, Mr Jersey told in a statement how the racist attack left him considering quitting his job.

He said: “These days you would think people would get used to black people in this country.

“I’ve been in this country 17 years but this vicious attack has made me rethink this job. I will probably leave this job now.”

Marshall and Bartley were drinking at Nancy’s Bordello, on Stepney Lane, Newcastle, in the early hours of Saturday March 22.

Around 2am customers were asked to leave and everyone complied except Marshall and Bartley, who had just ordered another pint.

When they ignored the bar manager, Mr Jersey was asked to intervene and tried to usher the drunken pair out.

At that point Marshall became abusive and launched into a racist rant, then Bartley joined in too.

As they reached the door, Marshall began punching a glass panel covering a menu, damaging it.

The EDL supporter in this article is Dean Bartley. 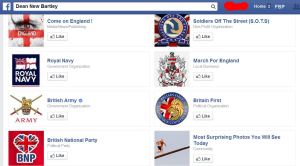