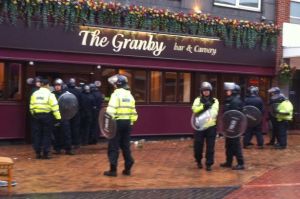 Riot police outside the Granby pub in Nuneaton

Seven more men have been jailed for their parts in the football-related mob violence which broke out in Nuneaton town centre.

A judge heard that one of the men threatened to burn down the Granby pub if its landlord handed over CCTV footage of trouble inside the premises.

Others were caught on camera outside the pub throwing glasses at the police line.

Appearing at the court in a series of hearings were Stephen Ginnelly, Jack Williamson, Ryan Palmer, Nicholas Ginnelly, Andrew Gadsby, Jamie Cheshire and Jack Paul, who had all pleaded guilty to charges of violent disorder.

Nicholas Ginnelly, 38, of Coronation Court, Nuneaton, who also admitted an offence of affray for which he was on bail at the time, was jailed for a total of 21 months.

Prosecutor Theresa Thorp had said Lincoln fans had gathered in two pubs nearby as officers were deployed to try to ‘kettle’ about 100 Nuneaton supporters outside the Granby.

Glasses were thrown, and gestures and threats were made to police officers and towards the Lincoln fans.

The mob burst into the pub, and as officers used riot shields to keep them inside, chairs and glasses were thrown at them.

Miss Thorp said that during the incident outside the pub Stephen Ginnelly threw a part-full plastic glass which struck a police officer.

Thomas Lawal, for Ginnelly, had gone to the pub for a birthday party and had thrown the glass out of ‘utter frustration’ at not being allowed to leave when he tried to do so.

Williamson was seen on CCTV gesticulating at the police or Lincoln fans to ‘come on,’ and threw a pint glass.

He then began inciting the rest of the crowd by chanting: “If you hate Old Bill clap your hands.”

Then as the mob forced their way into the pub, he struggled with the landlord who was trying to stop them, and then threw an object at police officers in the doorway.

Judge Alan Parker told Williamson: “One of the disturbing features is that, like you, many of the defendants who became involved in the violence were men who hitherto had led impeccable lives.”

Miss Thorp said Palmer had entered his plea on the basis that after the police had surrounded the Granby, he had asked to leave because he had arranged to pick up his child.

After his request was refused, he became abusive and kicked an officer’s riot shield, and then inside the pub he threw chairs and other objects to officers who had their shields up at the open window to prevent people climbing out.

His barrister told the court Palmer was ‘‘extremely embarrassed and ashamed’’.

Miss Thorp said that outside the pub Nicholas Ginnelly threw two plastic glasses of beer at the police, and once inside he threw two chairs and a plant pot at officers by the window.

He was among a group who began to help themselves to beer from behind the bar and he threatened the licensee that if he handed over the pub’s CCTV footage to the police he would burn the pub down.

Miss Thorp pointed out that at the time Nicholas Ginnelly was on bail for his part in an affray at another pub, for which the judge jailed him for three months consecutive to 18 months for his part in the violent disorder.

She said Gadsby had thrown a glass while in the middle of the mob outside the pub, although his barrister Ian Speed said it was actually a plastic bottle.

Gadsby, 25, of Higham Lane, Nuneaton, was jailed for six months.

Cheshire, 22, of Meadow Street, Nuneaton, was also jailed for six months. He was caught on CCTV walking round with a pint glass before throwing it and then running towards the police line with his arms outstretched and shouting ‘charge.’

Paul, 18, of Morwood Crescent, Nuneaton, was sentenced to 18 weeks detention after he had been seen standing on a bench and making obscene gestures towards the Lincoln fans before throwing a glass.