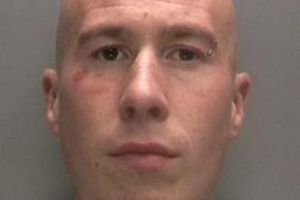 A Hinckley EDL protestor involved in a drunken hate-fuelled melee has been jailed for almost three years.

Kirk Jones, 28, was among 32 men handed immediate or suspended prison sentences for violent disorder over ferocious clashes with and police.

Trouble flared at a rally in Walsall town centre in September 2012 when 600 EDL followers confronted 200 members of the Unite Against Fascism movement who were holding a counter demonstration.

Missiles including concrete slabs and bricks were thrown at police who tried to restore order. A number of officers and EDL stewards were injured.

The sentences, all handed down at Wolverhampton Crown Court, were welcomed by the police and the Crown Prosecution Service.

Senior Crown Prosecutor Robin Allen said: “Fuelled by hate and alcohol, a section of the group, instigated by key figures within the demonstration, began to direct their anger towards the counter demonstration.

“Police officers were then exposed to some of the worst violence they have been subjected to in a public order situation.

“Concrete slabs, bricks and a table leg were among the items used as weapons and thrown at the officers.”

The riot involved children as young as 16. One of the youngest, teenager Samuel Phipps, was just 17 at the time, while West Midlands Police said a 16-year-old was also involved.

Jones was sentenced to 33 months while Richard Schulz, 38, of Farnborough, Hampshire, received the longest sentence, of 45 months, and John Cureton, 48, of Rollaston Road, Coventry, was jailed for three years.

Chief Supt Dave Sturman, commander of Walsall Police, said: “These court proceedings should send a clear message to those who are intent on coming to the West Midlands to cause trouble. We will not tolerate such behaviour.

“People who commit public order offences such as these should not rest easy as, no matter how long it takes, we will find you.”