A MAN shouted that a passing group of black teenagers were ‘looters’ in the wake of the riots last summer, a court heard.

Stefan Adamson, aged 24, then grabbed a 14-year-old boy and shook him by the straps of his rucksack in the city centre, Plymouth Magistrates’ Court was told. 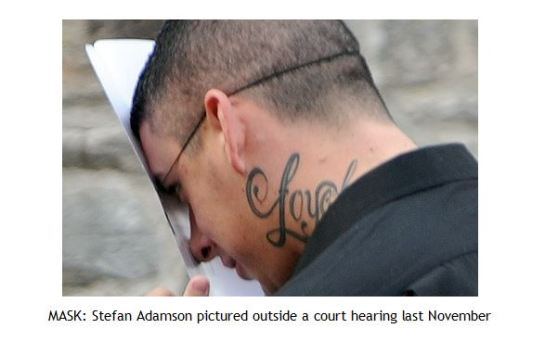 Adamson told the group of six, who were all black save one who was from a Turkish background, that they were ‘rioters’ and ‘looters’ following the violence that tore through Britain.

But he was found guilty of both offences after a trial. Sarah Vince, opening for the Crown Prosecution Service, said: “He singled out a group of black teenagers and taunted them in the street simply because of the colour of their skins.”The boy, now aged 15, told the court he had been walking down Armada Way towards the Hoe with five friends on the afternoon of August 12.He said as they passed the outside seating area of The Berkeley, formerly Bar Ha Ha, a tall man with a prominent tattoo on his neck shouted that they were ‘rioters’ and ‘looters’.The boy, who cannot be named for legal reasons, said the group walked by, but then returned to ask the man – Adamson – why he had called them names.He said Adamson accused them of ‘coming to our country’ and ‘taking our jobs’.

The boy said: “He started pulling the straps of my rucksack, he started shaking me and pulling me around.”

Adamson, who is 6ft 3ins tall, admitted in evidence to referring to the group as ‘looters’ and ‘rioters’.

But he said the comment was made to a friend and was a joke.

Adamson denied making any further comments and said he ‘did not lay a finger’ on the youth.

District judge William Tait said he was guilty of ‘offensive behaviour’ by insulting the group because of their appearance.

He added: “You showed hostility to the group simply because you perceived them not to be British.”

Mr Tait gave him a 12-month community order with 80 hours unpaid work. He was ordered to pay £25 compensation to the boy and £300 in prosecution costs.

The court heard that Adamson is already doing unpaid work on a community order imposed in November, when he admitted sending an offensive message by a public communication network.

Adamson, who had turned up at court wearing a David Cameron mask, urged internet users to ‘Bomb The Herald offices’.