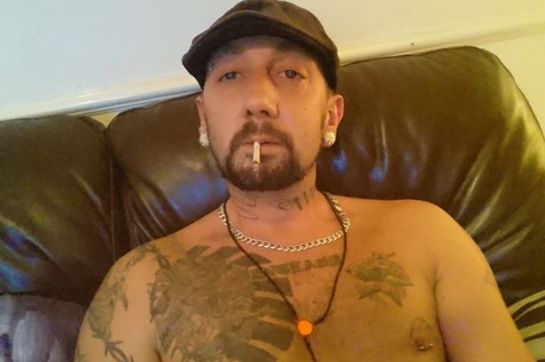 Police found a “man cave” filled with weapons and a Nazi flag after a man carrying an axe and arrows was found walking down a road wearing a gas mask.

Police arrested Daniel Joyner, 30, after tracking him down when they heard the sound of wood being chopped.

They discovered Bear Grylls fan Joyner sitting next to a small tent, with a bow, arrows, axes, cut throat razors and a machete, Isle of Wight Magistrates were told this week.

When they went to Joyner’s house, just 400 yards away, they uncovered more weapons, according to Anne Smout, prosecuting.

In a shed, which Joyner called his “man cave”, officers found a Nazi flag pinned to the ceiling and an English Defence League poster in the window, along with a British Army uniform and a Samurai sword.

Pictures of Joyner posing with his weapons were found on his mobile phone.

He told officers he collected military items as his hobby was “survival” and had been going to the woods near the cycle track to camp for a few days.

He said there was a possibility that society would “fail” and he wanted to be prepared, like American doomsday “preppers”, said Mrs Smout. 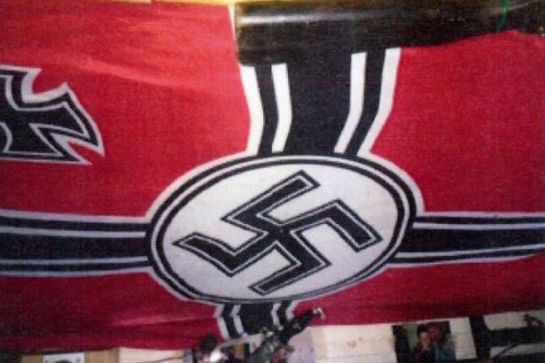 He said he had the axes and machetes for cutting wood and the cut throat razors for cutting rope and said a gas mask he was found with was due to a report of a gas leak.

Joyner’s lawyer Liz Miller said her client was a fan of war films and collected the items as his great-grandfather served in the armed forces.

He had since referred himself to a drug and alcohol misuse team.

She said: “He spent a lot of money on weapons as he was a collector. His shed was his ‘man cave’.

Everything was kept under lock and key.

“This was a mistake from his point of view rather than him trying to cause trouble.”

Magistrates ordered the destruction of the weapons found at the tent, but he will be allowed to keep the items found in his shed.

Joyner told the court he planned to sell the collection.

An EDL supporter has been jailed for five years today after being found guilty of attacking a man with a samurai sword.

Gareth Devlin from Port Clarence, Teeside attacked a group of Polish nationals who were watching the World Cup in July. During the attack, Devlin threatened to kill all Polish people.

The horrific attack was caught on camera by an amateur photographer who handed the evidence to police.

The Teeside racist can be seen waving the sword at the group of Poles which sadly included a group of children.

He then attacked one of the men causing a wound to the man’s back that required five stiches.

Devlin,28 admitted wounding with intent, affray and possession of an offensive weapon.

Another man, Joseph Smithson also admitted affray. He was given a two-year community order with 120 hours’ unpaid work and a year’s supervision.

Gareth Devlin is no stranger to crime, having 40 previous offences on his lengthy criminal record, including four for violence.He was sent to a young offenders’ institution in 2007 for having a home-made machete in a public place.