The men are being sentenced at Nottingham Magistrates’ Court today

Two men have pleaded guilty to racially-aggravated hate crimes after pork was smeared on the door of a mosque.

CCTV footage showed 28-year-old Jamie Mullins urinating on the outside of Five Ways Centre in Sherwood, which is used for Islamic prayer, while wearing a football shirt, drinking from a can of beer and carrying a St George’s flag.

He then smeared the pork sausage meat on the mosque.

Mathew Sarsfield, of Daybrook, said he felt “ashamed” after watching the CCTV, and admitted one charge of causing racially or religiously aggravated harassment, alarm or distress.

The court sent away Mullins, of Palmerston Gardens, St Ann’s, for a report to be made, with sentencing expected this afternoon, but Sarsfield was given fines totalling £230, and branded an “idiot” by presiding magistrate Paul Ensor at Nottingham Magistrates’ Court .

Neil Fawcett, prosecuting, said the crimes happened in the aftermath of the “horrific events in London, including the attack on Finsbury Park Mosque, so that was playing on the mind of Dr Mughal, who was inside the mosque”.

In the early hours of June 18, during Ramadan, the pair had been watching a boxing match, and said in a police interview that they were “feeling patriotic”.

A worshipper leaving the mosque before the meat was smeared noticed two men loitering, and was so concerned that he watched the CCTV on his phone. He contacted Dr Nughal, who was still inside the mosque, who then called 999.

The court heard that Sarsfield, who was representing himself, played a lesser part in the events.

Mr Ensor said: “You’re an idiot, if you had walked away you would not be here, if you had taken control and said (to Mullins) ‘what do you think you’re doing’ then that would have been fine.

“But you stood there and were complicit in his actions. You did next to nothing other than be there and take a selfie. 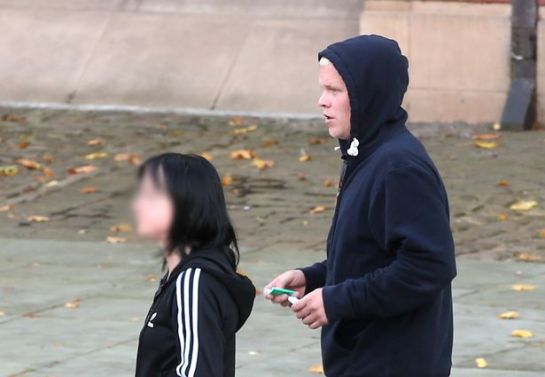 “There’s nothing we can hang you out to dry for, other than being an idiot.”

When asked by the magistrate how he intended to pay the fine, Sarsfield said: “I’m going to ask my dad.”

He then motioned at his father, who was in the public gallery.

The magistrate then said: “I know what I would be saying if I was your dad, and it would not be ‘here you go son’.

Speaking to Sarsfield, the magistrate then said: “You have children, so think about how, as a father, you would feel watching your children behaving in that manner. Ask yourself how you would feel.”

The court also heard that Sarsfield’s Facebook account was searched by police in the investigation into the crime.

Mr Fawcett said Sarsfield had shared posts from groups including the English Defence League, including lines such as “It’s not racist to love your people”, “Islam is on the rise, time to kick it back to the stone ages where it came from before it’s too late,” and “This isn’t immigration it’s an invasion”.