White supremacist Michael O’Neill, aged 61, made jibes at everyone from Taylor Swift to Sadiq Khan 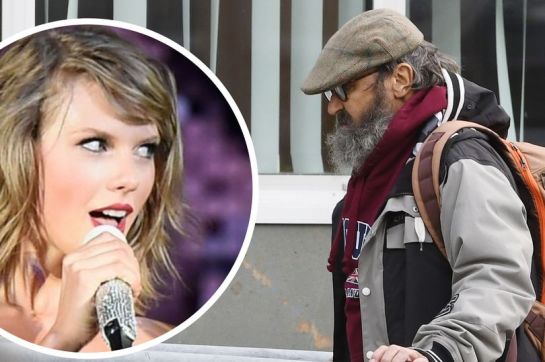 A Nazi has been jailed for a campaign of race hate on social media which included jibes at everyone from London mayor Sadiq Khan to pop superstar Taylor Swift.

But he created accounts under slightly different names so he could go on spouting filth.

He posted a picture of Tyler Swift with her arm around a black child and claimed she could catch Down’s Syndrome.

Jailing him for two years for his racist messages, Judge James Townsend said that he needed to pass a sentence to deter others.

He told the defendant the posts went on for a prolonged period of nearly three years and were available for all to see.

Police said after the case that the sentence should deter others from posting extreme views.

But he was found guilty after a four-day trial last month.

The jury saw more than 100 bizarre and offensive Facebook posts and tweets from between 2015 and 2018.

O’Neill, with links to the National Front and Combat 18, also said Mr Khan should ‘f*** off and die’.

The barrister also reminded the judge that O’Neill said Pakistani Muslims should be “wiped out”.

O’Neill told a court that a tattoo of the number 1488 – linked to Hitler – was nothing to do with Nazis and was just a reminder of his PIN.

O’Neill said that he had the ink done years ago because he kept forgetting the number.

He also briefly sang the anthem “Flower of Scotland” from the witness stand during his trial.

Rupert Taylor, for O’Neill, said his client had “learnt his lesson”.

He added that the defendant no longer posted messages on social media or associated with far-right racists.

He added: “He has had the good sense to mend his ways. He is anxious to accept assistance and that is something that could be done in the community.

“It is really a plea for mercy for him to live quietly with restrictions.”

Mr Taylor said that his comments did not provoke actual violence or drive anyone to radical views.

He added that when police searched his home in July that year, they found books, flags and music linked to the far-right.

DS Foale said: “His mindset combined with his aspiration for others to commit violence towards vulnerable members of our communities cannot be underestimated and could not go unprosecuted.

“O’Neill had at least eight Twitter and Facebook accounts attributed to him from which he continually posted a large amount of offensive extreme far-right material.

Chief Inspector Rob Mooney added: “The sentencing today of Michael O’Neill will send a positive message to the people of Plymouth that Devon and Cornwall Police and our partners will not accept any extremist ideology.

“Residents in our community must be protected from anyone that displays these abhorrent and bigoted behaviours.

“This court result shows that we take reports of this nature very seriously and urge our communities to carry on reporting such activity to police.

“If you have any information about suspicious activity or behaviour please contact Counter Terrorism Police in confidence. You can report a potential terrorist threat via our secure online form at gov.uk/ACT or call us on 0800 789 321.”

Nasty Michael O’Neill, aged 61, had ‘Hitler number’ tattoo but claimed it was his PIN

A Nazi made a bizarre racist jibe about Taylor Swift and a black child during a hate campaign on Facebook and Twitter.

White supremacist Michael O’Neill, aged 61, posted a picture of the pop star with her arm around the youngster and claimed she could catch Down’s Syndrome.

O’Neill told a court that a tattoo of the number 1488 – linked to Hitler – was nothing to do with Nazis and was just a reminder of his PIN.

He also briefly sang the anthem “Flower of Scotland” from the witness stand during his trial.

The jury saw more than 100 bizarre and offensive Facebook posts and tweets from between 2015 and 2018 at Plymouth Crown Court.

O’Neill was convicted by unanimous verdicts after a four-day trial on all the racial counts but cleared on the two religious counts.

Judge James Townsend released him on bail to be sentenced on December 13 with the aid of a probation report.

But he warned: “All options are open. Given his record of racially-aggravated matters, the starting point is an immediate prison sentence.”

The court heard that O’Neill was continually blocked by the social media giants for posting offensive material.

But he created five Facebook and three Twitter accounts under slightly different names so he could go on spouting filth.

He posted a picture of Taylor Swift with her arm around a black child. It included a close-up image of her hand on shoulder.

O’Neill commented: “Don’t touch the little blacky, you might get Down’s Syndrome.”

O’Neill admitted posting a picture of an axe-wielding Viking, but struggled to explain why he had attached the slogan: “It is time to rise up and cleanse our lands”.

O’Neill, who grew up in Birmingham, also posted a message about Pakistani Muslims.

He added: “The entire tribe needs eradicating, wiped off the face of the Earth like wiping s**t off your shoe.”

O’Neill took to the stand to deny that he had a tattoo of the Nazi slogan 1488 – insisting it was his PIN.

He said that he had the ink done years ago because he kept forgetting the number.

O’Neill said he did not know of its significance in far-right ideology until he joined Facebook four years ago.

The ‘Fourteen words’ represent a white supremacist slogan while 88 refers to the position of the letters HH in the alphabet – standing for Heil Hitler.

Unbelievably O’Neill sought to explain away twin SS lightning bolts tattooed on his chest, saying they were Norse symbols. He added he was awaiting for a third bolt to be added.

O’Neill had a particular dislike for the London Mayor Sadiq Khan, who is Muslim.

He added that he had been involved in a spat on Twitter, saying the Labour politician had called him “every name under the sun.”

But O’Neill posted a story about Mr Khan linking him with rising crime rates.

He added the slogan: “Fetch the petrol.”

O’Neill admitted: “I should not have written it.”

He claimed a mixture of poor memory, ignorance, being drunk and having a dark sense of humour were behind many of his posts.

The defendant admitted he became angry as a former fisherman confined to his home by injury.

O’Neill compared his humour with the edgy satire of Jo Brand – who once called on people to attack Boris Johnson with acid rather than milkshakes.

Seeking to explain why he had posted a message which seems to celebrate a news story of a Scottish man attacking an immigrant, he started to sing the patriotic song “Flower of Scotland”.

He denied inciting anyone to take up violence against racist or religious groups.

Prosecuting barrister Simon Burns put it to him that the books in the house showed that he was well-read rather than naive.

He added that he was not a member of any particular group, but had described himself as a “National Socialist”, which is where the German abbreviation of Nazi originates.