There were shouts of “democracy is dead” and “shame on you” from Amy Dalla Mura and a packed public gallery when Chief Magistrate Emma Arbuthnot gave her sentencing remarks on Monday. 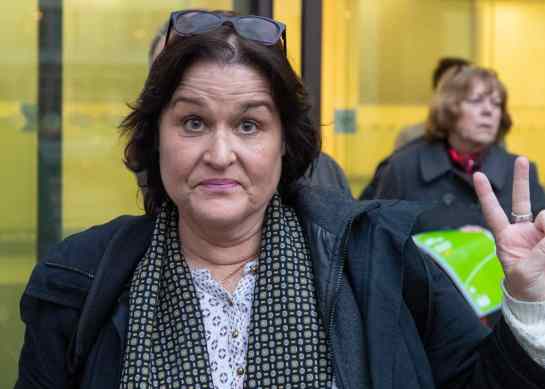 A Brexiteer who repeatedly harassed Anna Soubry before standing against her in the general election has been jailed for 28 days.

Amy Dalla Mura, 56, targeted Ms Soubry between January and March this year, turning up at events and calling her a “traitor” on live television, Westminster Magistrates’ Court heard.

Former MP Ms Soubry, a Remainer who lost her Broxtowe seat while standing for the Independent Group for Change, said she was left “frightened” following the incidents.

Dalla Mura, of Eton Villas, Hove, claimed that her behaviour was politically motivated and did not accept it was frightening, despite standing in the general election in the same constituency as Ms Soubry.

There were shouts of “democracy is dead” and “shame on you” from Dalla Mura and a packed public gallery when Chief Magistrate Emma Arbuthnot gave her sentencing remarks on Monday.

“Ever since the murder of Jo Cox, MPs no longer feel able to put up with sustained intimidation,” she said.

“You showed an obsession and fixation with Ms Soubry which has led you to bullying and intimidating, and harassing, this now-ex MP for Broxtowe.”

“This damages our democracy. Because who wants to put up with this sort of harassment?” she added.

Ahead of the sentencing, Judge Arbuthnot questioned why Dalla Mura had chosen to stand in Broxtowe, Nottinghamshire, just days after Ms Soubry told the trial she feared for her safety following the defendant’s actions.

“It was hard to see how (Dalla Mura) couldn’t have understood it was frightening,” Judge Arbuthnot said.

“Your client then stood against her in Broxtowe. That was the most serious point, that someone had been fixated not with Brexit but with Ms Soubry.

“Most people go and wave flags and shout. They don’t intimidate people right in their faces.”

She added: “Anyone with any sense would say it’s not a good time. I don’t mind standing in Hove but certainly not in Broxtowe.”

Ms Soubry, who became a target for Brexiteers after quitting the Tory party earlier this year, lost her seat to Conservative candidate Darren Henry after coming third in the general election, receiving some 4,668 votes.

Dalla Mura stood for the English Democrats and received 432 votes.

On January 23, Dalla Mura disrupted an event where Ms Soubry was speaking, repeatedly interrupting her and live streaming the event on Facebook.

Dalla Mura had to be escorted from the premises – the Radisson Blu Edwardian Hotel in central London – before the event could continue.

A second incident involved the 56-year-old branding Ms Soubry a “traitor” as she gave a live television interview to BBC’s Newsnight in Parliament’s Central Lobby, while once again using her mobile phone to video her.

The defendant was asked to stop filming in the premises, as it is not permitted, and left after police officers attended.

A week later, on March 22, Dalla Mura tried to intercept the MP outside the Cabinet Office in Westminster saying she wanted to “have a word”, but did not manage to find her.

A disgraced far-right activist who was jailed for electoral fraud earlier this year has had his claim of unfair dismissal against NHS England unanimously rejected.

Steve Uncles – who stood for the English Democrats in the 2010 and 2015 general elections and as a candidate in last year’s Police and Crime Commissioner election – took the organisation to an employment tribunal on the grounds he had been discriminated against.

Uncles, of Shears Close, Wilmington, claimed he had been unfairly treated because of his sex, race and philosophical belief in English Nationalism. 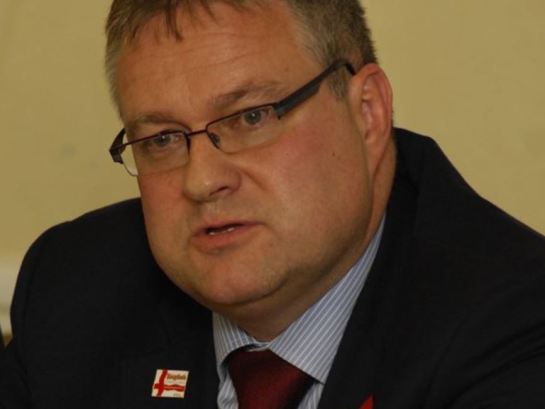 The hearing in Leeds was told in early 2016 Mr Uncles was employed by the NHS as a contractor, however during the hiring process failed to disclose he was standing for the role of PCC and was facing criminal charges. He also stated he would like to be known as Steven Thomas for work purposes.

Last May his line manager Paul Smith was approached by a colleague, David Birkett, who had come across Kent Online articles regarding Uncles’ crimes.

Further research by Mr Smith led him to stories about Uncles saying the best way to deal with the migrant crisis in England was: “To set up a machine gun and take out a few people – that would stop it very quickly and immediately cut dead this tactic.”

He also discovered anti-Islam social media posts on the claimant’s profiles which included ‘#RemoveAllMuslims’, with one reading: “Ethnic cleansing…always happens to Muslims…wonder why?”

The comments were incompatible with NHS value and due to his failure to disclose certain details Uncles – whose standard of work had been high – was summoned to a meeting in London and was sacked.

The 53-year-old claimed the issue regarding his name wouldn’t have been a problem were he of a different race or female. He also said complaint about his comments discriminated against his philosophical belief in English Nationalism.

The panel, led by Employment Judge David Franey, ruled being anti-Islamic and expressing violent solutions to issues of immigration formed no part of English Nationalism and that the claimant’s race and sex played no part in the NHS’ decision.

It concluded the NHS was within its rights to sack Mr Uncles and unanimously rejected his claim.

A Dartford man who forged election nomination papers four years ago has been handed a seven-month prison sentence.

English Democrat Steve Uncles was found guilty of seven counts of forgery and two counts of falsifying a statement relating to candidates on election nomination.

Prior to the local elections in April 2013, the Shears Close, Dartford resident, submitted English Democrat nomination papers to a number of local councils.

But inspections revealed that some nominated candidates did not exist and Uncles had also made up the addresses where he claimed they lived.

The 52-year-old even used the identities of two elderly people without their explicit knowledge.

In May 2013, Uncles, who was brought up in Bexley, admitted forging a signature as well as completing and handing in a number of forms.

He defended his actions by saying that he believed the candidates did exist even though he had not met them personally.

Following an investigation, Uncles was charged with the offences in February 2014, and was found guilty by a jury on February 24 2017.

Before his conviction, Uncles ran for Kent’s police and crime commissioner in 2016, but finished bottom of the pile, gaining just over 8,000 votes.

Investigating officer det sgt Alec Wood said: “In the 2013 local elections, Uncles submitted a number of nomination papers to council returning officers that contained details that were either materially false, were not signed by those who were standing, or simply didn’t exist at all.

“In two cases the identities of two very elderly persons were used without their explicit knowledge.

“These actions have deceived voters into casting a vote for persons who simply could never have taken office.

“These actions have undermined the electoral process which is the mechanism by which democratic societies determine the direction and control of our communities and society.

“Under the relevant legislation these offences are a ‘corrupt practice’ which means Uncles is barred from standing in an election for the next five years.

“I hope that the sentence issued by the court today serves as a reminder that those who tamper with the election process that they will be held to account in a criminal court.”

Robin Tilbrook, a founding member and chair of the English Democrats, confirmed the party had accepted Uncles’ resignation from the party.

He said: “It seems to me that he’s been convicted for something pretty silly, rather than something where someone commits burglarly and they don’t go to prison.”

Mr Tilbrook added that while the former regional leader “should not have” committed the crimes, “it did not make any difference” to the elections concerned.

A source close to Uncles claims he is appealing the court’s decision.

English Democrats regional leader Steven Uncles dreamt up fictitious names such as Anna Cleves and Rachelle Stevens – referred to by a judge as “the lady from S Club 7”.

The 52-year-old local politician, who has since resigned but remained an official in high office, was convicted of seven charges of using a false instrument with intent and two of causing or permitting a false statement to be included in a nomination form.

e was acquitted of causing or permitting the false signature of an elector to be included in a nomination form.

A judge told Uncles, who denied all the charges and represented himself during the trial, he should put his affairs in order before sentence on March 13.

As a result of the convictions he is now disqualified from standing for office for five years. He could also be landed with a costs bill of £10,658.

Maidstone Crown Court heard Uncles, of Shears Close, Wilmington, either put up candidates for election who did not exist, or real people who had not signed the relevant nomination forms.

Prosecutor Mark Weekes told the jury of eight men and four women: “It is the prosecution case in respect of local county elections held in May 2013 this defendant dishonestly tampered with that system.

“During those council elections he submitted nomination forms for candidates that were fraudulent. As a consequence, the machinery of the election was materially effected.

“The result was that electors who chose their candidate on the basis they could trust the system wasted their vote.”

As chairman of the party for the south east, Uncles submitted the nomination forms for candidates to become English Democrat councillors.

The system was open to abuse, as it was all too easy to submit people who did not exist.

“That situation was exploited by Mr Uncles in those local elections,” said Mr Weekes.

“He submitted a total of seven nomination forms that were fraudulent. Two are entirely fictitious.”

Following conviction, Mr Weekes said although distress was caused to those who were falsely nominated, votes cast for the party did not impact significantly on the election result.

But said Judge Philip Statman: “It undermines the concept of an individual going to exercise the democratic process at the ballot box of his or her vote, because there are individuals here who are fictitious.”

The case faced several delays caused by Uncles applying for adjournments – one being because he ran for the post of Police Commissioner in May last year.

He failed to appear on the first day of his trial on February 8 and was arrested on a warrant outside the court when he turned up the next day. He has denied breaching his bail.

The judge agreed to Uncles’ request to be legally represented at his own expense at the sentencing hearing.

Granting conditional bail, including a tagged curfew, Judge Statman warned: “My view is that clearly in offences of this gravity the custody threshold has been passed.

“I give you that warning so that you can put your personal affairs into good order.”