A former member of a far-right group has been jailed for three years for making explosives in his home, including a pipe bomb.

Tinklin had not wanted to injure and had not meant to create any risk, Newport Crown Court heard.

He had kept right-wing paraphernalia, including items with Nazi SS symbols.

Cardiff Recorder Nicholas Cooke said he must send a “stern message to those who flirt with the manufacture of devices of this kind”.

He said: “Ideas and political affiliations may come and go but there is a potential threat presented by someone who harbours an interest in explosives and extremist views.

“I cannot completely ignore that.”

The court heard that Tinklin gave up his right-wing political interests in 2005, and although he had downloaded a bomb-making manual, he had never opened the files.

Mr Cooke referred to Tinklin’s drug problem, saying it could lead to irresponsibility which coupled with an interest in explosives was a cause for concern.

He added there was the risk of explosive materials falling into the wrong hands.

However he gave him credit for his guilty plea but warned that people involved with explosives would face stern custodial sentences.

Tinklin was sentenced to three years, less the 119 days he has spent on remand. 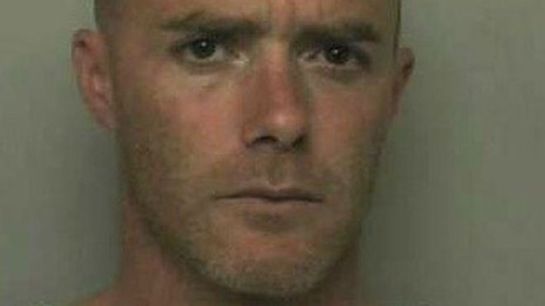 Harris had posters of Hitler in his living room, the court heard

A neo-Nazi has been jailed for five years for attacking an Asian man on the day of Fusilier Lee Rigby’s funeral.

Richard Harris, 38, who has Swastika tattoos, smashed a bottle over Zahoor Hussain’s head at the Mornington Lodge in Blackwood in July 2013.

Newport Crown Court heard he got angry after spotting his victim talking to an “attractive white woman” colleague.

Harris, of Blackwood, was found guilty of racially aggravated wounding.

Harris, who said he was a member of a fascist “white pride” movement and had pictures of Hitler in his living room, shouted at the woman: “What are you doing drinking with terrorists?”

He then told the British Asian Mr Hussain: “You are all animals. This is not your country”.

Harris then smashed a full beer bottle over Mr Hussain’s head knocking him unconscious and leaving his left ear nearly severed from his scalp.

Harris told his trial “Hitler’s views are common sense on a lot of things” and claimed there “needs to be more research done” into whether the Holocaust took place.

He was found guilty of the attack, which left his victim with hearing problems and severe lacerations to his left ear and neck.

Sentencing him, Judge Jonathan Ferris said was a “dangerous extremist who is capable of extreme violence”.

Speaking after the case, Supt Mark Warrender, who is in charge of hate crime at Gwent Police, said the attack was a “disgusting assault” which had life-changing effects for the victim.

“The majority of people find his behaviour, which was fuelled by racism, abhorrent. There is no place for racism or any hate crime within our communities,” he said.