A serial burglar was caught with 13 wraps of amphetamine strapped to his private parts when police arrested him for an attempted house raid.

Mark Wright confessed “it’s wizz, for my personal use”, when the packages, attached to his penis and testicles, were found.

It is believed he had used cellotape to hold the drugs in place and confessed he had been trying to hide them from his wife.

Newcastle Crown Court heard the 43-year-old, who has served prison sentences for burglaries in the past, was arrested by police who caught him trying to break into a house at Close Street in Sunderland on August 25.

Prosecutor Neil Pallister told the court: “While in custody the defendant was subjected to a full body search and 13 wraps of white powder were found strapped to his penis and testicles.

“On them being discovered, he said ‘it is wizz, for personal use’.”

Alec Burns, defending, said, despite Wright’s bad criminal record, he had found work since his last jail term and was staying away from trouble.

Mr Burns said: “He was taking amphetamine to allow him to work longer hours.

“He had to buy the drugs and got into debt.

“He was hiding the fact he was using drugs again from his wife, who would have stopped him had she known. ”

Mr Burns said the attempted break-in was a blip, not a sign Wright, who still has a job open to him, was going back to his “old ways”.

Mr Recorder Christopher Williams sentenced Wright, who has spent a month in custody on remand, to 15 months imprisonment, suspended for 18 months, with
rehabilitation requirements.

The judge said he accepted Wright had “done well” since his release from prison and told him: “I accept you are disappointed in yourself.

“It is in your hands now.”
Sunderland Echo

He faces four charges of making off without payment between February 4 and 23.

The 46-year-old is alleged to have stolen petrol from Birchencliffe Service Station as well as from service stations in Lockwood Road, Lockwood, and Wade Street and Salterhebble Hill, both in Halifax.

Ayscough denies the charges together with an additional charge of driving whilst disqualified.

He pleaded guilty to a charge of possession of a small quantity of class B drug amphetamine on February 23.

Magistrates told him that he faces trial at the Huddersfield court on July 2. 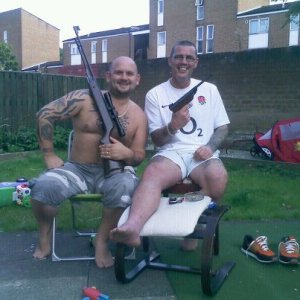 A MAN who looked after a gun and bullets in exchange for having a debt written-off has been jailed for five years.

Police found a Webley 8mm pistol and two rounds of ammunition when they raided Paul Duffy’s house, after a tip-off in December.

Officers also discovered a prohibited CS gas spray and a small amount of amphetamine during the search at Warkworth Close, Washington.

Prosecutor Neil Pallister told Newcastle Crown Court the gun, which had been manufactured in Italy and adapted in the UK, was tested by experts who confirmed it had “lethal potential.”

The bullets were live and capable of firing.

Duffy told detectives he was looking after the firearm and ammunition in exchange for a drug debt being wiped out.

The 47-year-old said he had been due to give the CS gas spray to a young woman who was concerned for her safety due to the number of rapes in the Washington area, and wanted to carry it for protection.

Duffy admitted possessing a prohibited firearm, live rounds of ammunition, a prohibited weapon and a small amount of amphetamine.

Judge Brian Forster told him: “Anyone who has in their possession a prohibited firearm commits a very serious offence.

“Parliament has decided that judges must impose a minimum sentence of five years imprisonment in such cases and the reason is clear.

“There must be a deterrent sentence to ensure that people do not take such weapons into their possession.

“Weapons such as this are usually carried in offences of robbery.

“While they are carried there is a real risk of death or serious injury to those who may be the victims of such crime.”

Lee Fish, defending, said Duffy is in poor health and uses a walking stick due to back and leg problems.

Mr Fish said: “He was holding the gun for someone else. He has no previous convictions which involve weapons or firearms.”