A FORMER bakery worker who threatened to ‘kick his boss’s head in’ sent threatening messages over a social networking site after losing his job.

Stuart Alexander Baines, 30, of Briarwood Court in Beverley Road, Malton, began sending abusive messages over Facebook to his boss Andy Mayer after being suspended from his job at Yorkshire Baker, based in Malton, Scarborough magistrate’s court was told.

Neil Holdsworth, on behalf of the Crown Prosecution Service, told the court that Baines had begun making threats after he was suspended on March 18 before leaving a threatening message on the work phone warning Mr Mayer “he was coming to get you one by one.”

Mr Holdsworth said: “Stuart was making threats on Facebook including one that said ‘Andy you are going to get your head kicked in.’

“The post was extremely threatening and of cause for concern for Mr Mayer and his colleagues. He felt concerned for his safety.”

Baines, who pleaded guilty on May 13 to sending threatening messages on March 19, was diagnosed with psychosis at the age of 13 and has struggled with drink and drug problems, the court was told.

Representing Baines, Mike Farr said that Baines had not touched any drink or drugs for some time now but at the time of the incident he had not been taking his medication to help with his psychosis.

He said: “When this incident occurred he had split from his partner and for two weeks he had been living alone.

“He had not been taking his medication and I am sure that that played some part in his foolishness. He was feeling at somewhat of a low ebb so he posted the comments on Facebook and I think made one phone call. He realises that it was inappropriate behaviour.”

Farr went on to say that Baines had apologised for his actions and had not been in court for about four years, with a previous conviction for assault.

Baines was fined a total of £145 for sending the threatening messages over the site, broken down as £85 court costs and a £60 surcharge. He was also given a six month community order with a supervision requirement and a four week curfew from 6pm-6am each day. 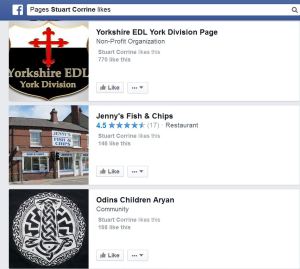