DRUNKEN Matthew Walley smashed a man over the head with a bottle – after he was asked to put his dog on a lead.

The 22-year-old was told by Mark Dias to put his dog on a leash as he was concerned it may harm his partner’s cat.

But Walley who had drunk 20 cans of lager, became aggressive.

Stoke-on-Trent Crown Court heard Walley had spent May 25 drinking and at 11pm Mr Dias noticed the defendant’s dog was in his partner’s garden in Silverdale Road, Newcastle.

Prosecutor Joanne Wallbanks said: “Mr Dias asked the defendant if he would put the dog on its lead as he was concerned his partner’s cat would be harmed.

“The defendant was acting as if he had been drinking, and was irrational and aggressive.

“The defendant said, ‘Come on lad’. He was twice the size as Mr Dias who said he did not want any trouble.

“The defendant raised his hand and slammed a bottle or glass on Mr Dias’s head causing a 1cm-2cm laceration, which was glued.”

Police arrived and Walley said: “If you touch me I will set my dog on you.”

Stuart Muldoon, mitigating, said Walley had a history of mental illness but his family have seen a dramatic change in him as a result of the medication he has been prescribed.

Mr Muldoon said: “He is adamant that his future is positive. He now realises the triggers behind his offending, both the use of alcohol, binge drinking, and the regular use of cannabis. He appreciates cannabis exacerbates whatever issues are going on in his mind.”

Judge Paul Glenn said a sentence of immediate custody was inevitable and jailed Walley for 27 months.

He said: “Mr Dias was simply trying to get his partner’s cat in the house. He was concerned about the cat’s safety and asked you to put your dog on a lead.

“You became aggressive and confrontational.

“He was scared and he told you he did not want any trouble. You smashed a glass or bottle against his head and the glass shattered.

“Fortunately the injuries were not as serious as they could have been but they required hospital treatment.”

Judge Glenn said the offence was aggravated because Walley used a weapon, he has relevant previous convictions, he was on bail for another matter and was drunk.

He added: “As matters stand you represent a high risk of re-offending and of causing serious harm to other people.” 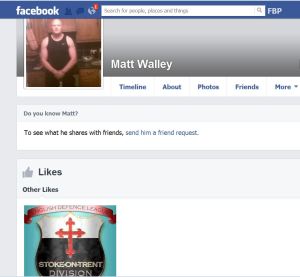