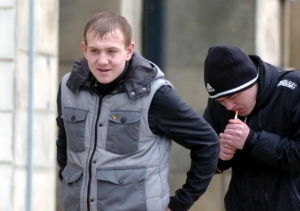 SIX men have admitted charges after left and right-wing groups clashed at a demonstration in Sunderland.

They were arrested following a protest against plans to covert a former council depot in Millfield into a mosque.

Prosecutor Glenda Beck told Sunderland magistrates that demonstration began at 12.30pm on October 6, with both sides shouting at each other.

“The right-wing group was the most hostile,” she said. “Trying on several occasions to breach the police line to get at the left-wing demonstrators.

“The demonstration lasted about one hour before both groups moved away.”

Mrs Beck said that at about 3pm, after the main demo had ended, he drew his first back and ran at a group of between 30 to 40 Asian men in Stewart Street.

He was charged with the second offence in November, after police viewed CCTV from the incident and heard him using anti-Muslim abuse.

Defending, Heather Bolton said Brown had friends and family living near the site of the mosque and he had aired his concerns about it at public meetings.

She added: “Both groups were chanting at each other and it appears that the other group made threats of violence and were making gestures of throat cutting.

“He accepts that he did retaliate in reaction to that and did make a comment in relation to Allah.”

Mrs Beck said he was spotted by officers throwing an object at supporters of the mosque.

Mitigating, Mrs Bolton said Stokoe had been drinking in Millfield, came across the demonstration and decided to join in.

“He cannot recall throwing any object,” she added. “But accepts that he has.”

Both cases were adjourned for sentencing until April for Probation Service reports.

Anthony Farrer, 37, of Cleveland Road, was given a six-month conditional discharge after admitting throwing an egg at anti-fascists.

Also involved was Ronald Wood, 39, of Lonnen Drive in Swalwell, Gateshead, who was fined £110 after admitting racially-aggravated harassment.

Shaun Bunting, 34, of Fenhall Green, Newton Aycliffe, was fined £133 after refusing to comply with a police notice to leave the area.

His solicitor, Jason Smith, said the offence took place outside The Chesters pub after the protest.

l Three men yesterday denied charges against them relating to the protests.

Gary Biggar, 41, of Clarke Street, Kilmarnock, Scotland, denied racially-aggravated harassment and was released on bail until May.