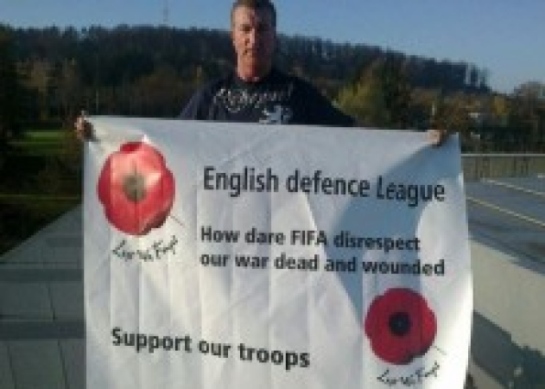 A ROOFTOP protest over the ban on the England football team having embroidered poppies on their shirts has cost two English Defence League members £3,000.

EDL leader Stephen Lennon and member Kevin Carroll flew to Switzerland last Tuesday and 24 hours later managed to get on to the roof of the FIFA headquarters in Zurich.

They were demanding England players be allowed to wear poppies on their shirts for their friendly against Spain after the governing body ruled emblems were not allowed because the poppy was seen as a political emblem.

The compromise of allowing the teams to wear black armbands with poppies on was reached after interventions from Prince William and David Cameron.

But Mr Lennon claims his protest was the tipping point.

“FIFA changed their mind after two hours of us being up on that roof,” he said. “Everyone’s saying it was David Cameron but it was us.”

The pair were arrested when they came down from the roof after four hours, and were fined £2,300 and had to pay £700 court costs.

“They said our reasons were just but obviously it was against the law,” said Mr Lennon. “They put us in a grimy prison for three days.”

Their spell behind bars meant the pair were not in London on Friday when 170 English Defence Members were arrested at a pub near the Cenotaph because police believed they were headed for the protest camp at St Paul’s Cathedral.

Mr Lennon said: “They dragged everyone out of the pub and held them for four hours. There was no trouble.

“The police said they were preventing a breach of the peace so they arrested everyone, men and women. But no-one was charged with anything, they were all just released after four hours.”