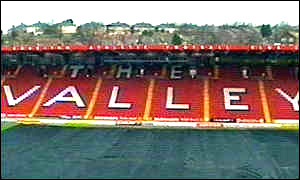 An inquiry began after men were arrested at the Valley

A former security guard at Charlton Athletic Football Club has told a court he was offered £20,000 to help disrupt a Premiership match for a Far Eastern betting syndicate.

Roger Firth, 49, was giving evidence in the trial of Wai Yuen Liu, of Kensington, west London, who is accused of being part of the betting scam.

The syndicate was accused of masterminding two abandoned matches in 1997 by putting the floodlights out. They were planning to target a third when police broke up the plot, Middlesex Crown Court was told.

Firth and Malaysians Eng Hwa Lim, 35, and Chee Kew Ong, 49, have admitted conspiring to cause a public nuisance at a game between Charlton and Liverpool on 13 February, and are awaiting sentence.

Wai Yuen Liu, 38, denies the charge and his trial continues.

The court heard that Ong and Lim, an electronics engineer, questioned staff at Charlton’s ground in December 1998 about security arrangements, as they were involved in a new stadium in the Far East.

They were referred to Firth and he met them later for dinner at a Chinese restaurant in west London where the floodlighting issue was first raised.

After a further meeting with the pair Firth said he was offered £20,000 to give them access to the floodlights, to fit a remote-control device to disable the lighting system.

But police were alerted to the alleged plot after loose talk from Firth, who offered a second guard £5000 to stay on the switchboard at the club while the floodlights were being tampered with.

Mr Liu and the two Malaysians were arrested outside the ground three days before the match.

Firth said the night of his arrest was the first time he had seen Mr Liu.

Mark Dennis, prosecuting, said the alleged plot showed a “complete disregard to the damage that could be caused to the reputation and integrity of the professional game in this country”.

If a match was abandoned before full time, bets still stood and depended on the score at the time.

Mr Dennis said that although the crime was perpetrated in the UK, the profits would have been raked in elsewhere.

A syndicate could make a “considerable gain” if the match was abandoned when the score was favourable.

The first match alleged to have been disrupted by the syndicate was at Upton Park in November 1997 where West Ham were playing at home to Crystal Palace.

The lights went out 20 minutes into the second half just after West Ham had equalised.

The second was a month later at Selhurst Park where Wimbledon were playing at home to Arsenal. Again the lights went out shortly after half time when the scores were level.

Mr Liu was born in Hong Kong, but had a British passport and had lived in London for a number of years, the court heard. He was a heavy gambler and had joined the Golden Horseshoe Casino in west London in 1994.

Over a two-year period he made about 560 visits there and lost about £120,000. The court heard he was heavily in debt to credit card companies and banking institutions.

Mr Dennis said: “It may help to explain why he was happy to be part of this money-making conspiracy.”